Engineered structures and the fluids, such as air and water, that surround them are constantly interacting. The flapping of a flag or the humming of power lines in a strong breeze are near-daily reminders of these mutual interactions. 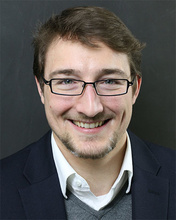 The interactions also produce important effects on bridges, aircraft wings, and ship hulls. At worst, it can lead to catastrophic infrastructure failures, such as the infamous collapse of the Tacoma Narrows bridge in 1940. These structures also impact the flow of fluids around them, and if properly controlled could lead to safety and performance improvements.

This dynamic known as the fluid-structure interaction (FSI) is at the heart of research of Casey Harwood, University of Iowa assistant professor of mechanical engineering, and the focus of Harwood’s new National Science Foundation (NSF) CAREER award.

"Fluid-structure interactions are everywhere, affecting transportation and infrastructure that the world relies on," Harwood said. "Despite that, the engineering community lacks rigorous methods to study and understand these interactions."

Engineers are skilled at designing around the potential hazards of FSI, Harwood said, but he sees value in understanding these interactions.

"I want to flip the concept on its head – take FSI from something to be avoided and turn it into a well-understood and well-controlled aspect of day-to-day design," Harwood said. "Doing so can open up new avenues for improving the fuel efficiency and the safety of transportation by air, land, and sea."

Harwood views the NSF CAREER award as a statement that scientists and engineers recognize the importance of FSI research and education. The CAREER grant is among NSF’s most prestigious awards in support of early-career faculty. The five-year, $604,690 CAREER grant will support the project titled, “Understanding and Harnessing the Dynamics of Complex Fluid-Structure Interactions.”

Harwood, who joined the UI College of Engineering in 2017 and is also a researcher at IIHR-Hydroscience & Engineering, said the current experimental methods do not paint a complete picture of the potential hazards or the realizable benefits of fluid-structure interaction.

When a structure is immersed in water, for example, the water can increase the effective mass of that structure by as much as 500%, but the way that additional mass is distributed – as well as the effects of bubbles, waves, or currents – are not captured by existing experimental methods. Vibration of structures also produces small motions in the surrounding fluid that Harwood hypothesizes can be used to make wings and propellers more resistant to stall or to reduce the drag of objects like tractor trailers or ship hulls.

As part of the grant, Harwood plans to conduct a series of experiments to attain a deeper and more actionable understanding of the mutual effects of flexible structures and fluids upon one another.  The goal is to leverage the information for smarter, safer, and more efficient design, modeling, and monitoring and ultimately improved safety and performance.

Harwood expects to involve graduate and undergraduate research assistants, with pipelines for paid assistantships, for-credit projects, and involvement with student outreach initiatives on and off campus. He also plans to initiate a project-based workshop for secondary school students in a rural and economically disadvantaged school district in Washington state.