Item: Recently, one of Google Inc.’s experimental vehicles was involved in a crash with a bus on the West Coast. Nobody was hurt in the 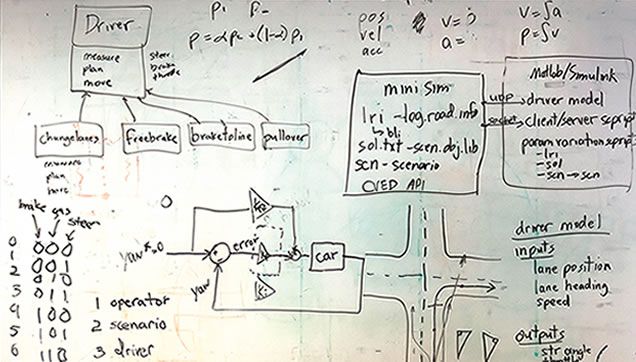 but the first-of-its-kind crash indicates that driving on U.S. highways isn’t the same as it used to be.

Item: In early February, the Governors Highway Safety Association reported a 10 percent increase in pedestrian fatalities for the first six months of 2015—the largest such increase in four decades—and suggested a linkage to cell phone usage. Pedestrian interaction with roadways is changing, too.

Conclusion: U.S. highways are changing. Self-driving cars are either the wave of the future or they’re just around the corner, depending upon whom you believe. Similarly, distracted walking, marked by pedestrians who text while walking, is a common and growing practice in virtually all cities.

What can be done to make highways safer? Quite a bit—by studying our changing highways and the people who use them—say researchers at the University of Iowa’s National Advanced Driving Simulator (NADS). A unit
of the College of Engineering, NADS is one of five national research facilities studying the safety of all highway users as a part of the $1.4 million federal Safety Research Using Simulation (SAFER-SIM) University Transportation Center.

In 2013, the U.S. Department of Transportation (DOT) Research and Innovation Technology Administration
selected the UI, University of Central Florida, University of Massachusetts-Amherst, University of Puerto Rico-
Mayaguez and University of Wisconsin-Madison from among more than 140 applicants. Their challenge: to conduct research on highway safety issues as determined by the DOT.

At the UI’s NADS SAFER-SIM Center, highway safety issues being researched include:
• Automated and autonomous driving.
• Driver interaction with other drivers.
• Response differences between texting and non-texting pedestrians at the Hank Lab.
• Building and testing real world roadways in simulators.
• Student education and outreach programs for K-12 students.
• Support for a federal program (MAP-21) designed to govern U.S. ground transportation spending.
• The future of vehicle simulators and simulation study to assist researchers.

“The center is looking at all road users,” says Dawn Marshall, Director of the SAFER-SIM Center. “Simulation and safety are the key threads.”

In regard to automated and autonomous new car technology and experimental car technology, UI researchers are looking at a broad spectrum of vehicle capabilities, says Chris Schwarz, NADS senior research engineer with expertise in automated vehicles and all types of driver assistance systems. While some new vehicles have minimal automated technology, others offer assisted braking and adaptive cruise control, and still others provide assisted parking and more. Vehicles capable of driving themselves from point A to point B are so thoroughly automated that they are considered to be “autonomous.”

Marshall predicts that in five to 10 years thousands of cars on U.S. roads will be “semi-autonomous,” thereby raising another highway safety question.

While semi-autonomous vehicles may be able to drive themselves autonomously from one city to another along interstate highways, they may need to relinquish control to their human drivers at some points. This need might arise in construction zones and at the beginning and end of trips, where human control is needed to negotiate local roads and driveways.

For example, individuals driving from Iowa City to Chicago might drive from their homes to interstate highway I-80, at which point they would allow the car to drive autonomously for hours while they read a book or watch a movie. But at the end of their journey, and possibly along the way, it might be necessary for them to prematurely re-assume control.

“A ‘transfer of control’ in which vehicle control passes from a human to the vehicle or vice versa can happen under either normal or severe circumstances,” says Schwarz. “If a driver doesn’t have full situational awareness when a transfer of control occurs, it could lead to safety problems.

“If people place too much trust in autonomous vehicles, drivers could end up letting things go when they should be paying attention. For example, in the extreme, a driver could be watching a movie or sleeping when a transfer of control is requested,” says Schwarz.

“This is a major question,” says Marshall. “There will be a transfer of control. Something as simple as backing out of your driveway to encountering highway construction or a crash site—those are not leisurely activities; they are time-critical.”

While the autonomous study remains in the planning stages, another safety study—on “distributed simulation,” or how one driver interacts with another—is scheduled to begin this summer.

In this study, two drivers will be in two different driving simulators. The study will provide a model of how people in slightly different locations experience the same drive down the same highway.

Examples of real-world situations in which distributed simulation is key to avoiding crashes include lane changing on the highway and driver interactions at four-way-stop intersections.

In both instances, each driver must compensate for the presence of other drivers if all are to avoid a crash. Sometimes the key to ensuring the safety of all drivers is as simple as a wave of the hand or a nod of the head to indicate that the one driver is aware of the other.

“Distributed simulation gives us a look at one human interacting with another, while we as researchers are able to record and understand those interactions,” says Marshall, “which is very exciting because it is the missing link between on-road and simulator data!”

A pedestrian-focused SAFER-SIM study is investigating texting pedestrians on a crosswalk as they encounter realistic traffic situations in a computer-simulated and safe environment. This study, which is in full development, is taking place at the UI’s Hank Virtual Environments Lab located on the UI campus. So far, researchers have found differences between texting and non-texting students encountering traffic at crosswalks.

The research is designed to determine whether texting pedestrians will pay attention to countdown (think “3-2-1-0”) warning messages sent by approaching technology-equipped cars to pedestrians’ cell phones. The answer isn’t as simple as it may seem because some people may choose to ignore warning messages if those messages are sent too frequently, says project co-investigator Joe Kearney.

Hank Lab studies have always benefited from the lab’s capability to change such variables as the number of vehicles on the roadway and the intervals between moving vehicles.

Recently, the Hank Lab acquired the ability to study two test subjects simultaneously. It’s a capability that should expand study opportunities for both pedestrians and bicycles.

A NADS SAFER-SIM study that examines roadways that have yet to be constructed may save valuable highway resources, as well as make roadways safer.

In this project, researchers will enter real-world roadway data into a simulator with the goal of creating a simulated version of a highway that is on the drawing board for future construction.

“We can build a road in the simulator before it has been constructed in the real world and test the safety implementations. We can do this in a few months using a simulator—not the years it would take to collect safety data after it is built,” says Marshall.

She notes that a dangerous intersection, for example, can take years to correct because data must be collected before changes can be made. Even after real-world data is collected on the number and types of crashes, safety experts will still have little notion of what drivers experienced just prior to a crash.

However, researchers can use a simulator to re-create the intersection, introduce real drivers to the situation, and collect information on braking, steering and other variables and analyze the data—all in a matter of months.

“Why people crash is a huge puzzle that we have to take one bite at a time” says Marshall.

In addition to research, educational outreach is part of the NADS SAFER-SIM Center. Junior high and high school students in the Iowa City area plan to use the NADS to collect and analyze driving data. They will also use the simulator to study principles of physics, such as the “coefficient of friction.”

The coefficient of friction describes the relationship between the force of friction between two objects—in this case, vehicle tires and the roadway—and the normal force between those objects, says Tim Brown, NADS senior researcher. The friction between two surfaces changes stopping distances and can convert energy into heat, a process of interest to physicists and engineers alike.

NADS research assistant Jacob Heiden noted that students had the opportunity to see the unintended—and dangerous— consequences of distracted driving when operating the nother facet of the NADS SAFER-SIM Center’s educational outreach effort is a new online course called Global Road Safety that is being developed in the UI College of Public Health and will be made available locally, nationally and internationally to students and practitioners.

Cara Hamann, postdoctoral research scholar, and Cori Peek- Asa, director, of the University of Iowa Injury Prevention Research Center, are designing the course that will allow students to better understand how roadway risks vary widely around the world and what can be done to make roads safer.

The course will use innovative student-led teaching methods.

“Globally, road traffic will soon become the fifth leading cause of death, with rates growing quickly in many low and middle income countries,” says Hamann. “We are very excited to be working on this new interactive online course, which will bring together students and practitioners to examine interdisciplinary approaches to reduce this global burden of road traffic crash injuries and deaths.”

Additionally, the SAFER-SIM project, together with the UI Public Policy Center and MyCarDoesWhat.org, has a miniSim™-based exhibit that will travel across Iowa as part of the UI Mobile Museum. Visitors learn about modern safety systems as they interact with the portable simulator, which is based upon the world-class NADS-1 simulator (http://www. nads-sc.uiowa.edu/sim_minisim.php).

One of the messages of the educational outreach program is that certain traffic flow patterns are safer than others. Roundabouts are safer and more efficient than four-way-stop-sign intersections. Also, using “J-turn” entryways to cross busy highways can reduce T-bone accidents. A J-turn is a maneuver in which a north-bound car would be able to emerge driving west-bound from an intersection by turning right and going east for a mile or so and then crossing the median and turning left to enter west-bound traffic.

Yet another NADS SAFER-SIM Center goal is to support Congressional act called MAP-21 (Moving Ahead for Progress in the 21st Century Act). Passed by Congress and signed into law by President Barack Obama in 2012, MAP-21 is a blueprint for spending on U.S. ground transportation.

Among the bill’s provisions is one that consolidated funding for bicycle and pedestrian transportation into a program in which half of such funding is used by metropolitan planning organizations and the other half is used by the states.

“MAP-21 is a safety goal issued by the federal government and includes road users such as pedestrians and bikes,” says Marshall. “At NADS, we’re looking at the vehicle research component of MAP-21.”

Finally, the NADS SAFER-SIM Center is investigating the future of vehicle simulation itself. Today, recreating a real world location for use in a simulator is largely a manual process. It can take from one to three months for an engineer to create a location based on specifications and measurements gathered in the field.

Marshall says that in the future, she would like to have a process that allows the automatic conversion of engineering drawings and other data for roadways into environments in the simulator in hours or minutes.

“Such variables as the slope of a road, the position of a stop sign, the timing of a traffic light, and the number of inches the sign or light is located from an intersection would be instantly available to the simulator,” Marshall says. “We have to build a simulator to account for all highway user variables— from the ground to the sky.”