A miniature version of the University of Iowa’s advanced driving simulator will participate in a clinical trial later this year to assess a patient’s driving ability after cataract surgery. 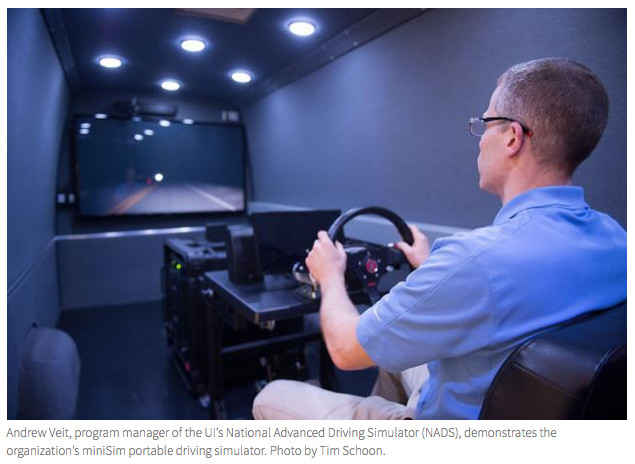 The trial will help determine if a newly developed artificial lens will be approved for sale in the United States. The lens replaces the patient’s natural, cataract-ravaged lens during surgery, and the trial will determine if it sufficiently reduces visual distractions caused by headlights when driving at night.

That headlight glare is especially problematic for cataract patients because the artificial lens they receive during surgery can often cause them to see haloes around oncoming headlights, a phenomenon called halation. This effect is minimized over time, but until then, it can be a significant distraction to the driver and increase the possibility of a traffic accident.

The miniSim, designed by the university’s National Advanced Driving Simulator (NADS), mimics the kind of glare that drivers encounter from headlights. During testing, the patient will drive the miniSim and be asked to detect and identify signs and road hazards in the simulated drive. Based on the drivers’ responses, researchers will then evaluate the lens’ functional performance and compare it with a control lens.

Before a new lens is approved for market by the FDA, manufacturers are required to perform a study to show functional performance of the device, and driving simulation is one of the ways they can do this. The manufacturer of the lens will submit the results of the driving study to the FDA as part of the process of determining whether the lens can be approved for widespread implantation.

The miniSim consists of a display, steering wheel, pedals, and a PC, all of which is small enough to fit in a van and be driven to clinics and other health care centers so it’s conveniently accessible to patients participating in the clinical trial.

“Simulation is a great alternative to on-road testing because it provides a controlled and safe environment where sensitive measurements can be made while performing the driving task,” says NADS miniSim Program Manager Andrew Veit. “We have gone a step forward in building a simulator that’s mobile and goes to the patients instead of having the patients come to the simulator.”

The miniSim was developed in 2006 and has been used in numerous other research capacities, such as testing automotive systems for compliance with National Highway Traffic Safety Administration Distraction Guidelines, driver training, and applied research and development, including augmented reality, vehicle automation systems, and fuel efficiency modeling. It is used in human factors, psychology, engineering, medicine, and the product development process.  It has also been effective in clinical trials of central nervous system active pharmaceuticals that potentially impair driving performance.

The clinical trials will begin later this summer.