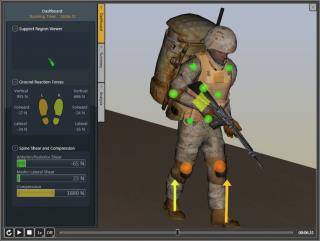 GruntSim™ is a biomechanics and physiology simulation tool for burden management that resulted from a five-year, $8.6 million project awarded to VSR by the U.S. Office of Naval Research and called Enhanced Technologies for Optimization of Warfighter Load (ETOWL), and transitioned to its final client, the Marine Expeditionary Rifle Squad (MERS). The purpose of the recently completed GruntSim™ project is to create simulation tools for the study of load carriage by military personnel.

For example, military commanders using GruntSim™ can conduct trade-off analyses of load carriage in terms of agility, survivability, human performance, and physiological assessments by programming Santos® with specific height and weight data for each person, loading Santos® with gear selected from a menu of some 160 Marine specific 3D representations of gear, and having Santos perform various warfighting scenarios. Depending upon the stress experienced for each task, Santos®’s spine, knees, ankles, and other joints will flash either green for low stress, yellow for moderate stress, or red for high stress.

According to the Marines, using a 3-D computer-aided design capability allows gear developers to outfit and change a Marine avatar any way they can imagine before running it through a virtual obstacle course.

GruntSim™ is part of the Warfighter Simulation initiatives (http://www.ccad.uiowa.edu/military/warfighter-simulation) conducted by CCAD .