Throughout the history of commercial aviation, the cockpit crew always has involved a minimum of two people — the pilot and co-pilot.

But that could change.

Cedar Rapids-based Rockwell Collins has been named by NASA Ames in Mountain View, Calif., as the lead research company for its single-pilot operation program. The roughly five-year, $4 million contract will not involve live trials for many years.

John Borghese, vice president and director of Rockwell Collins’s Advanced Technology Center, said the aviation industry and government researchers for some time have been taking a serious look at the potential for having a single pilot flying a jetliner.

“There are a number of technical, certification and policy considerations that must be addressed along the way,” Borghese cautioned.

One of the driving forces behind the single-pilot research is an anticipated pilot shortage. Boeing is projecting a need for 533,000 new commercial airline pilots over the next 20 years as the number of miles flown doubles. (Analysts, labor unions and academics contend any pilot shortage will result from the industry’s unwillingness to sufficiently pay pilots.)

Under the single-pilot scenario, Borghese said a co-pilot on the ground rated for the type of aircraft involved would be linked to the plane and assist pilots during the busiest periods of flights.

“We might actually improve safety if the person on the ground has more experience in complex and dense airspace like Chicago, or has intimate technical detail of the engines and equipment on the airplane,” Borghese said.

Thomas Schnell, director of the University of Iowa’s Operator Performance Laboratory, said such an individual would essentially act as a “harbor pilot,” providingvaluable assistance to the pilot on the aircraft.

“They would know all the peculiarities of that particular airspace,” he said. “It’s something that needs to be considered for normal single-pilot operations as well as unusual situations.” 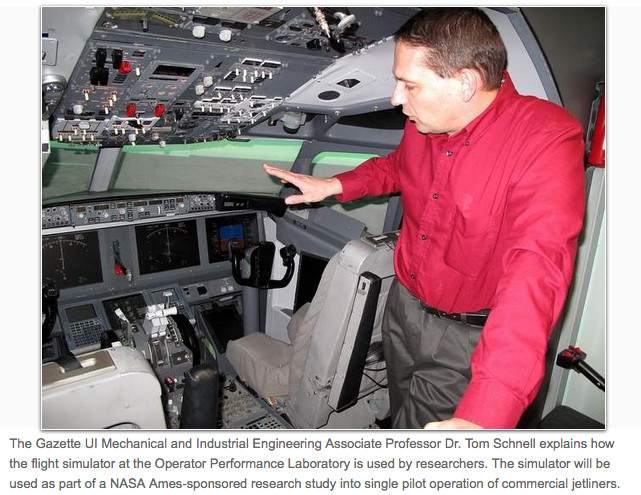 Borghese said most modern commercial aircraft are equipped with “auto-land” capability to safely land an airplane. Even so, he said it’s preferred by the industry that a pilot and co-pilot be present on the airplane in the event that something should go wrong.

Two of the biggest issues confronting the use of a single pilot on a plane and a co-pilot on the ground are proximity and trust.

Rockwell Collins is working in partnership with the UI Operator Performance Laboratory and California State University, Long Beach, to investigate what happens when a pilot and co-pilot are separated.

“We will take a pilot out of the simulator and put him in another room to see what happens,” Schnell said.

“When you’re flying next to someone, you can see their movements. If the co-pilot is reaching to change the altitude setting on the autopilot, there might be a head nod or some other form of acknowledgment.

“Those subtle interactions are not present when you separate the crew. If we start flying with a single pilot in the aircraft and a virtual co-pilot on the ground, they likely will have other methodologies that we cannot even contemplate.”

Borghese said researchers also are looking at physical changes that might be required in the cockpit or flight deck to accommodate a single pilot.

“We’re investigating voice recognition to reduce the pilot’s workload to make his job easier,” he said. “We’re also looking at decision aids that would handle root functions — if A happens, you always do B. Can a computer handle that task if the answer is always B?

“When an engine goes out, one of the first things that a pilot does is tell air traffic control. Why not have the computer do that and free up the pilot to concentrate on keeping the airplane flying and safe?”

Borghese does not expect the co-pilot’s seat will be removed from the cockpit any time in the future. Rather, he expects the flight controls will become more intuitive — similar to the way that iPhones have made it easier for users to readily perform various functions.

Advances in technology have played a role over the decades in reducing the number of crew members in the cockpit. In the years after World War II, commercial airliners typically carried a pilot, co-pilot or first officer, flight engineer, navigator and radio operator.

By the 1980s, the positions of radio operator and flight engineer mostly had been eliminated. Boeing and Airbus designed jets with increasing automation that also eliminated the need for a navigator.

While the single-pilot research may determine that such operation is safe and feasible, industry and public acceptance likely will determine if single-pilot operation ever comes to fruition.

“We need the involvement of a lot of stakeholders — the airlines, the Federal Aviation Administration, the Air Line Pilots Association and the air traffic controllers,” Borghese said. “We clearly need their expertise and guidance in terms of what will need to happen to make single-pilot operation safe in their areas.

“This is really research and not product development. We don’t know how this is going to come out.

“If we can’t keep at least the same safety level, this will never go forward.”