Growing up in a family where his mother and father graduated from Iowa State University, University of Iowa College of Engineering graduate student Lee Hauser of Solon, Iowa, has to wonder 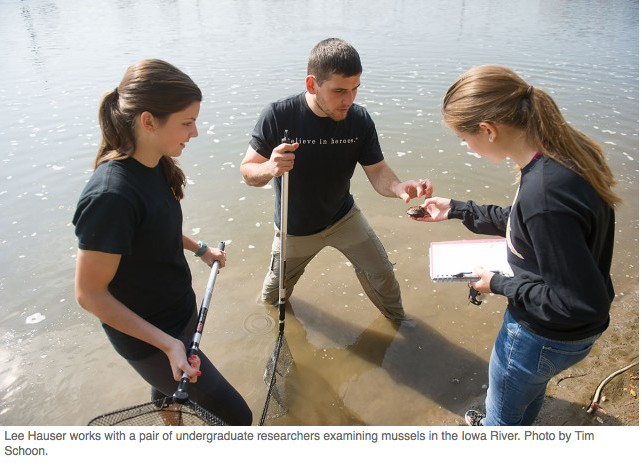 how he ever wound up at the University of Iowa.

He even enrolled at ISU as a first-year student and spent two years on the Ames campus.

However, the answer isn’t complicated. He transferred to Iowa City when he decided that the UI offered him a better opportunity to study water quality, and he’s been a Hawkeye ever since.

To learn more about the UI Department of Civil and Environmental Engineering programs, people, and research, visit this website.

“My senior year at the UI, I worked with associate professor Craig Just and asked him about graduate school possibilities,” says Hauser, who earned his bachelor's degree in civil and environmental engineering from the UI College of Engineering in 2014. “He said I might want to work on studying mussels as an indicator of river water quality.”

Today, water resource engineering has become his career goals, with the opportunity to work in government or industry a distinct possibility. He notes that an old adage about the value of water may come close to the truth in some parts of the world experiencing drought.

“I would like to go into the consulting industry because it would allow me to help with a range of water issues,” Hauser says. “Whether it is designing water treatment plants or identifying pollutants present in water sources, I want to apply my knowledge of water chemistry to help others deal with their water problems.

“It’s been said that clean water may one day be worth its weight in gold. Some people don’t believe it, but it may be getting closer to the truth,” Hauser says. “Over the past summer, I worked in Ghana installing a solar-powered water well, and they understand the value of clean water.

“The people in Ghana appreciated our work.”

Back in Iowa City, Hauser, with UI undergraduate students, has studied mussels in the lab.

In the lab, carefully controlled conditions simulate the mussel’s natural habitat, which allows researchers to control what chemicals are present. As a result, they can identify changes in mussel behavior during changes in water chemistry.

When he isn’t in the lab, Hauser spends part of his research time wading along the banks of the Iowa River, searching for mussels to use in a study of river water quality.

Research advisor Just says the mussels are an excellent tool for studying the nitrogen cycle, including the amount of nitrogen that finds its way into the Iowa River. That’s no small question, he points out, as the agriculture industry spreads some two billion pounds of nitrogen fertilizer on crop land each year—and an estimated 20 percent of the total finds its way into Iowa waterways.

Up to his knees in water, Hauser drags his net along the sandy river bottom and searches for mussels. When he comes upon a mussel, he removes it from the water, and attaches two electronic sensors to it. The first is designed to monitor—in volts, which can then be converted to millimeters—the gap the shell opens to take in river water. That’s important because mussels act as water cleansing units, removing impurities from the water and not only using them for their own development, but also providing nutrients for other organisms living along the river bottom.

The second electronic sensor monitors the heart rate of the mussel, so that Hauser and other researchers strolling along the shore can pick up the signal to see how actively the mussel is doing its job.

Sometimes the pocketbook and three-ridge mussels—the varieties of mollusk he mainly studies—are easy to find. At other times, such as this past summer, the river can experience a “mussel blip,” or lack of mussels due to drought or flood conditions that tend to relocate the mussels and make them easier prey for raccoons and other wildlife.

Either way, through plenty and scarcity, Hauser says he’s glad to be at the UI where mussels are helping him to reach his dream career in water quality engineering.