As driverless vehicles inch closer to becoming mainstream, there’s an important step between them and us: testing. 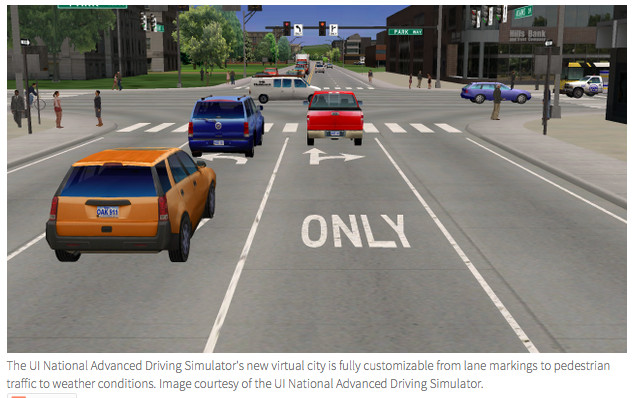 Springfield is a 285-square-mile virtual city—slightly larger than Chicago—that replicates the look and feel of urban, residential, rural-highway, and interstate driving environments.

Compared to on-road driving test sites, the virtual Springfield offers a safer, faster, and more cost-effective way to test vehicles of all types, including driverless cars.

Most importantly, says Omar Ahmad, director of operations for NADS, Springfield provides a test environment that’s ideal for research. Because the virtual city is fully customizable and controllable, experiments are repeatable and therefore more accurate, he says. In the real world, driving experiments are exposed to unpredictable elements, such as weather and changes in daylight. That’s not so in Springfield, where at the flip of a switch you can adjust weather, time of day, traffic, and road conditions, such as dry, wet, and icy.

“Research needs repetitiveness, and simulation lends itself much more to a cycle of iteration,” says Tim Brown, a senior human-factors researcher at NADS who has been using simulation for research for more than 20 years.

NADS is the nation’s premier driving-simulation research and development facility. When it became operational in 2001, it was the largest and first simulator of its kind anywhere in the world. To date, the simulator has generated more than $55 million in research contracts for the U.S. Department of Transportation and the automotive and pharmaceutical industries.

UI researchers began developing Springfield about two years ago, drawing on staff expertise from years of simulation work at NADS.

For safety reasons, on-road test sites typically use professional drivers, which isn’t optimal if researchers want to determine how the average consumer would handle a particular driving environment. Drivers of all ages and experience levels can take to the road in Springfield, including those who are sleep-deprived, intoxicated, or have another condition that would be too dangerous to test in a real driving environment.

Springfield also presents researchers with the option to quickly and easily make changes to suit their needs. Want to adjust lane markings? Add another intersection? Replace a gas station with a Starbucks? Springfield can do that.

Ahmad says he looks forward to using Springfield to test the future of vehicle technology.

“You don’t have to wait,” he says. “You can test what you’ll be driving 10 years from now today.”