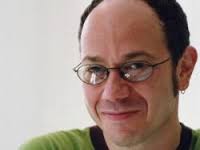 Kac is internationally recognized for his telepresence and bio art. A pioneer of trelecommunications art in the pre-web '80s, Eduardo Kac (pronounced "cats") emerged in the early '90s with his radical works combining telerobotics and living organisms. He is known for his visionary integration of robotics, biology and networking. His work deals with issues that range from the mythopoetics of online experience to the cultural impact of biotechnology; from the changing condition of memory in the digital age to distributed collective agency; from thc problematic notion of the ""exotic"" to the creation of life and evolution.