Located hundreds of miles inland from the nearest ocean, the Midwest is unaffected by North Atlantic hurricanes.

With the Nov. 30 end of the 2014 hurricane season just weeks away, a University of Iowa researcher and his colleagues have found that North Atlantic tropical cyclones in fact have a significant effect on the Midwest. Their research appears in the Bulletin of the American Meteorological Society. 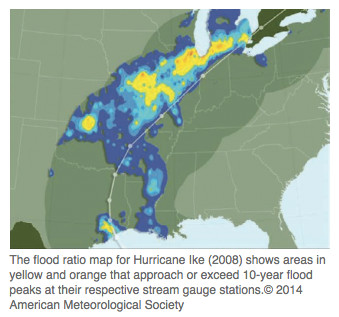 Gabriele Villarini, UI assistant professor of civil and environmental engineering, studied the discharge records collected at 3,090 U.S. Geological Survey (USGS) stream gauge stations from 1981 to 2011 and found that the effects of North Atlantic tropical cyclones impact large areas of the United States away from Florida, the East Coast and the Gulf Coast.

“When you hear about hurricanes or tropical cyclones you think about storm surges and wind damage near the coast,” says Villarini, who also conducts research at the internationally renowned IIHR-Hydroscience & Engineering. “But it’s much more than that. Flooding from a single tropical cyclone often impacts 10 to 15 states located hundreds of miles from the coast and covering a wide area.

“Our results indicate that flooding from tropical cyclones affects large areas of the United States and the Midwest, as far inland as Illinois, Wisconsin, and Michigan,” says Villarini.

"The USGS stream gauges, located east of the Rocky Mountains, showed that tropical cyclones can cause major flooding over the Midwest, including the southeastern corner of Iowa," he says.

Villarini and his colleagues conducted their study by relating maximum water discharges recorded by USGS stream gauges with the passage of the storms over the Midwest and eastern states. Accordingly, they were able to construct maps for each storm that show the relationship between inland flooding and tropical cyclones.

Despite these important impacts, inland tropical cyclone flooding has received little attention in the scientific literature, although the news media have begun to pay more attention following Hurricane Irene in 2011 and Hurricane Sandy in 2012, he says.

Villarini says that the amount of financial damage caused by the storms in the Midwest and the eastern United States will be the subject of a future study.

Villarini’s colleagues are Radoslaw Goska of IIHR, James A. Smith of Princeton University, and Gabriel A. Vecchi of the National Oceanic and Atmospheric Administration’s Geophysical Fluid Dynamics Laboratory in Princeton, New Jersey.

The research paper, “North Atlantic Tropical Cyclones and U.S. Flooding,” can be found in the September issue of the Bulletin of the American Meteorological Society at journals.ametsoc.org/doi/abs/10.1175/BAMS-D-13-00060.1.

Funding for Villarini and Goska was provided by the Iowa Flood Center and IIHR-Hydroscience & Engineering. Villarini also notes support from the U.S. Army Corps of Engineers Institute for Water Resources. James Smith acknowledges support from the Willis Research Network and the National Oceanic and Atmospheric Administration (NOAA) Cooperative Institute for Climate Sciences.