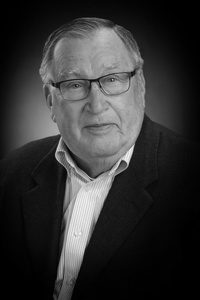 Bill Ditch’s strong entrepreneurial spirit, impeccable ethical standards, and drive to complete complex projects has led him to a career filled with innovation, determination, and success.

A native of Muscatine, Iowa, Ditch served in the U.S. Army at Ft. Riley, KS. He returned to Iowa and graduated from the University of Iowa in 1956 with a Bachelor’s Degree in Mechanical Engineering via the G.I. Bill.

After graduation, Ditch was hired by AT&T, and led important projects establishing communications networks across the country and across the world.  His analysis of the flow of information traffic guided the company’s strategies for revenue growth.  For example, his telephone traffic analysis showed there was essentially no traffic after 10 p.m and on weekends.  With traffic down during those late and off hours, Ditch thought about how to begin creating demand in those time periods. From a business point of view, Ditch felt it made perfect sense to offer a discounted rate because that is capacity bandwidth that isn't used at all. Thus, the approach created new demand, and AT&T was able to charge less for phone calls late at night.  When he left AT&T, Ditch was regional vice president for the East Coast.

Wanting to explore and develop his own entrepreneurial goals, Ditch founded his first company, The Sterling Group, in 1986 with a former colleague from ADT. Other former ADT colleagues were brought in over the years.  The Sterling Group, with more than 600 employees nationwide, had many subsidiaries and affiliated companies. Ditch served as CEO, was on the Board of Directors, and served as an officer on most of the companies in the group.  The Sterling Group was sold in December 2013 to Cennox, a British global leader in banking and retail support services.

Ditch’s knowledge transcended all aspects of the companies, from specialized unit pay systems, routing field employee work schedules, technical aspects of all types of fieldwork, and insurance.  The companies included:

ASI/Alarm Services, Inc., with a presence in more than 30 states, providing inspection of commercial fire and burglar alarm systems, with many various special projects for alarm companies and banks.