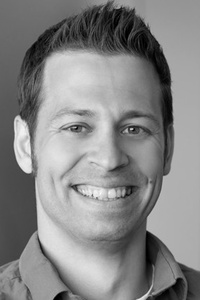 Steven Davis developed a groundbreaking software program for his master’s thesis that served as the foundation for a thriving company enabling advanced life science research.

The journey began at the University of Iowa, where Davis, the president and co-founder of Bio::Neos, got his professional start. He received academic all-Big Ten honors as a member of the Hawkeye men’s gymnastics team and worked as a research assistant in the College of Engineering’s Coordinated Laboratory for Computational Genomics.

“As a student, Steve was brilliant. His raw intelligence set him apart from his peers from the first time I met him,” says Thomas Casavant, who was Davis’s UI professor and advisor—and now is his business partner. “He started conducting research in high-performance computing, machine intelligence, and genetics while still an undergraduate, and by the time he finished his master’s degree, his thesis software embodied solutions to myriad problems in human genetics research.”

This complex and integrated software system, TrAPPS, lets clinicians and human genetics researchers sift through billions of pieces of information to discover genomic variations that account for hundreds of blinding eye diseases. It also allowed Davis to launch a successful business venture. “I like to create things, whether that means software to help researchers, new jobs, or my business itself,” he says. “I’m motivated to create things that improve our world.”

Today, their company—which is located in the BioVentures Building on Iowa’s Oakdale Campus—writes customized software that allows life sciences companies to analyze large volumes of data. David Conrad, the UI assistant vice president for economic development, says, “Steve’s work is very valuable to researchers inside the University of Iowa and at biotechnology companies across the globe.”

Davis has shared his story with thousands of UI entrepreneurial students; judged numerous student business plan competitions; and mentored students in the BELL, the UI Venture School, and the Student Accelerator. In addition, he was the main instructor in the Dev/Iowa Bootcamp, a foundational web application development course. He also finds time to teach STEM Innovator curriculum as a Tippie College of Business adjunct lecturer, as well as to serve as an officer of the Hawkeye Endurance Athletic Team, a nonprofit triathlon club that he co-founded.

Through his leadership, hard work, and inspired thinking, Steve Davis has helped pave the way for the game-changing innovators and entrepreneurs who will follow in his footsteps.

Davis is a member of the UI Alumni Association.  In 2017, he received the Distinguished Young Alumni Award from the Association.