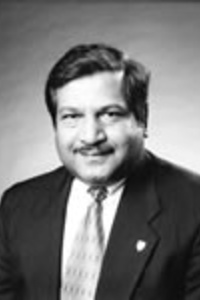 S. K. Nanda has made distinguished contributions to the emerging fields of water resources engineering technology, particularly in the development of large scale watershed modeling and real-time management. A graduate of the Indian Institute of Technology, Nanda completed advanced studies at the Iowa Institute of Hydraulic Research, earning an MS degree in mechanics and hydraulics from The University of Iowa in 1968. He joined the U.S. Army Corps of Engineers at Rock Island, IL, as a hydraulic engineer and became the principal hydraulic engineer, chief, hydrology and hydraulics branch of the Rock Island District, overseeing daily real-time hydraulic operation of 20 locks and dams on the Upper Mississippi River and several large reservoirs in the Midwest. Nanda has been involved in many pioneering remote sensing technologies in water resources and was the project manager of the multi-million-dollar remote sensing demonstration project of the US Army Corps of Engineers that culminated in 10 engineering technical letters. He has served as chairman of the multi-state, interagency task force to revise flood profiles of the Mississippi and Missouri Rivers, and represents the Army Corps of Engineers on the National Academy of Science Committee on Hydrological Sciences. Nanda has served as a member of the College of Engineering Advisory Board, is a Fellow of the American Society of Civil Engineers and the Society of American Military Engineers. He also is a founding member, trustee, and diplomate of the American Academy of Water Resources Engineering, presently serving as president-elect of the academy.