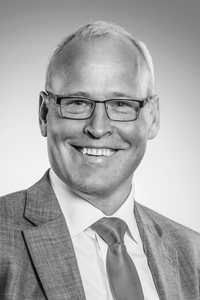 Ross Teggatz (BSEE 1985) is an industry leader in mixed-signal design and power management.

Teggatz serves as chief technology officer and chief architect for power technologies at Semtech Corporation. Previously he served as senior vice president and general manager of the Power Management and High-Reliability Product Group. He joined Semtech Corporation as a result of Semtech's acquisition of Triune Systems, L.L.C. in March 2015.

Teggatz has more than 30 years of experience in mixed-signal design and power management. He was founder, chief executive officer and president of Triune Systems, L.L.C. from November 2007 to February 2015 and was responsible for managing and overseeing the design, development, applications and marketing functions for all of Triune's business which included wireless power, ultra-low power, isolated and non-isolated power and data products. Before that, Teggatz played senior-management roles in the analog, mixed-signal, and power organizations of Texas Instruments, including the director of the Mixed-Signal Power and Control organization, where he managed a team 120 development engineers, and CTO for the Custom Mixed- Signal organization. His responsibilities included business and technical development of both the custom automotive and consumer markets, as well as creation of an organizational structure to pursue markets in the industrial and medical areas. He started several successful product lines, include the TPIC power IC catalog product line and prior to joining Triune, created and organized a development team to develop digital power control. To further utilize his abilities both as a technical and business expert, Teggatz was involved assessing corporations for mergers and acquisitions. At TI, he was promoted to Fellow in 2003 for his expertise and contributions to revenue in the mixed-signal power area. He holds over 50 patents with many more pending in the areas of semiconductor process, devices, circuits and systems.

Teggatz has been recognized often as a technical leader. He served as both program committee member, and later as the chairman of the IEEE BiCMOS Technology and Circuits Meeting (BCTM) conferences. He has authored numerous conference and journal articles.