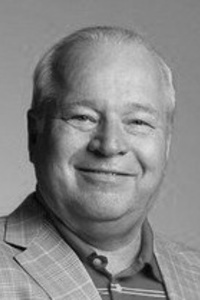 Roger Koch has successfully combined a keen business sense with the engineering skills he learned at the University of Iowa to build a remarkable career in innovative aerospace interior products.

After graduating from the University of Iowa in 1977, Koch joined Grain Processing Corporation, Muscatine, IA, and moved the following year to the Illinois Institute of Technology in Chicago.  In 1979, he joined DECA Aviation in Miami as manager of a new division devoted to sales of executive seating for luxury jets. In 1983, he was named president of Aircraft Modular Products and subsequently became owner. During that time, the company grew rapidly, gaining a 90 percent share of the executive aircraft seat market. In 1998, Koch sold his aircraft interior products company to B/E Aerospace Inc. and served as a consultant.

Today, Koch is president of Conscious Lighting, Miami, which specializes in the design and manufacture of energy-saving, light-emitting diode (LED) lighting fixtures. He also has served as a member of the UI Department of Chemical and Biochemical Engineering Advisory Board and has given seminars at the college on entrepreneurship. He has mentored a number of young engineers at his company who later became successful business leaders themselves.

Koch's philanthropy efforts have made significant differences at the UI. In 2011, he provided two generous gifts to the UI to spark pioneering interdisciplinary research into bipolar disorders. In addition, Koch made a second gift to provide major support for the College's Department of Chemical and Biochemical Engineering. The research fund promotes interdisciplinary research in bipolar disorders to discover the relationships of brain morphology, function, external stimuli, physiologic status of the body and other influences on the onset, treatment, and prediction of bipolar disorder and schizophrenia events. The support provided to the Department of Chemical and Biochemical Engineering will continue to raise the level of educational excellence that will benefit students.