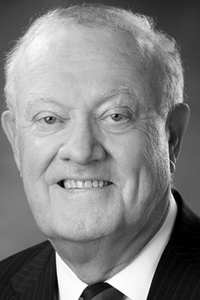 Phillip O. Mayberry has channeled his passion for the University of Iowa into a lifetime of good works on its behalf.

When Mayberry first arrived on the UI campus—following in his siblings’ footsteps—he made a conscious decision to take full advantage of the student experience. He attended everything from football games and lectures to dances at the Iowa Memorial Union. He also worked in the residence halls and in his fraternity house to help cover the costs of attending the UI College of Engineering.

After graduating from Iowa with a degree in industrial engineering, Mayberry landed a position as a sales engineer with Fisher Controls Company, and he later joined Emerson Process Management in Marshalltown, Iowa. Though he recently retired from Emerson as vice president of sales-marquee accounts, he continues to work part-time for the company as director of customer events.

Mayberry’s early lessons in networking and engagement are what keep him so involved with the university now. He has been on the UI College of Engineering advisory board since 2000 and was a key member of its enrollment management committee, which helped the college dramatically increase its numbers. Mayberry also plays a key role in helping recruit new students to the college.

“Phil is consistently a positive and enthusiastic supporter of the university and college—and a tremendous ambassador,” says Robert E. Kress, a partner at Accenture who chairs the UI College of Engineering’s advisory board. “When students are considering Iowa for engineering, he is supportive and explains the strengths of the college. He has maintained relationships with many of these students he helped recruit, and he provides career guidance and mentoring.”

Not only does Mayberry serve as a mentor for students, but he also helps some of them attend college, thanks to the Phillip O. Mayberry Engineering Scholarship for deserving undergraduate students from the state of Iowa.

His commitment to supporting new Hawkeyes extends beyond the College of Engineering. Mayberry is an avid fan of UI athletics, and as the longtime president of the Marshall County I-Club, he has organized many large annual spring banquets and inspired two of his friends to establish fully endowed scholarships for Hawkeye student-athletes.

In addition, Mayberry has secured generous sponsorship support for the Polk County I-Club Senior Dinner in Des Moines—an annual event that helps Hawkeye student-athletes connect with business leaders from throughout the state. He is also a past member of the UI Alumni Association’s board of directors.

Such efforts earned Mayberry the 2004 Volunteer of the Year Award from the National I-Club—and a recent nomination to the National I-Club board of directors. “Phil is one of the most animated ‘Go, Hawks’ cheerleaders for student-athletes, coaches, and the entire Hawkeye nation,” says Alec Scranton, dean of the UI College of Engineering. “He has defined the very meaning of ‘service’ for his alma mater.”

From one-time student to successful volunteer, Phil Mayberry has helped ensure that the University of Iowa remains a vibrant and welcoming place.