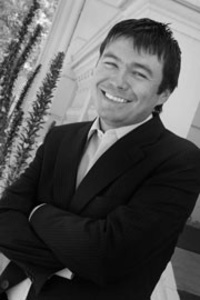 Marcelo Mena-Carrasco, 03MS, 07PhD, is a scientist with the heart of a social activist, and his game-changing research in the field of civil and environmental engineering has helped transform air quality in his home country of Chile. Since childhood, Mena-Carrasco has demonstrated a deep social awareness, as well as an interest in the world around him. He grew up near a highly polluted stream in a working-class section of Santiago, and although his parents eventually moved to Iowa City, Mena-Carrasco's earliest experiences sparked his lifelong interest in tackling tough environmental issues. After graduating with honors in biochemical engineering from Universidad Catolica de Valparaiso in Valpairaso, Chile, Mena-Carrasco returned to Iowa to earn his master's and doctoral degrees in civil and environmental engineering. He originally intended to research water quality, but after learning more about the work happening in the UI Center for Global and Regional Environmental Research, he shifted his focus to the relationships among airborne pollutants, weather, and climate. While at Iowa, the young researcher not only studied the complex mechanisms of climate change and pollution, but also found time to help establish the student chapter of Engineers for a Sustainable World and to lead groups of UI students to Mexico, where they taught grade-school children about clean water. In addition, Mena-Carrasco helped UI Professor Jerald L. Schnoor, the Allen S. Henry Chair in Engineering, create a course titled "Sustainable Systems," which now plays a central role in the UI College of Engineering's Sustainability Certificate program. "He was one of the most talented graduate students whom I have had the pleasure of teaching in over 30 years at Iowa," writes Schnoor of Mena-Carrasco. "Marcelo greatly improved the community of our environmental program by virtue of his creativity, ideas, and leadership." When he finished his Ph.D. degree in 2007, Mena-Carrasco returned to Chile, where he now serves as chair of the new environmental engineering department at Universidad Andres Bello Santiago, one of Chile's most prestigious institutions. He also directs the school's Center for Sustainability Research, a position he accepted after spending a year at California State University at Fresno as a Fulbright Visiting Scholar. Recently, he agreed to serve as an energy and climate consultant for Fundacion Chile, a private nonprofit corporation for Chilean business growth, and he is a member of the UI College of Engineering's Water Sustainability Advisory Board. From 2008 to 2009, he was the national advisor on air quality to the Chilean Environmental Commission. Mena-Carrasco's cutting-edge activity in the area of chemical weather forecasting has led to a new understanding of how air-pollution episodes evolve. He has greatly improved air-quality forecasts in Chile, and he hopes to apply this model to other countries throughout the world. In recognition of such efforts, he has received the NASA Group Achievement Award, the Environmental Protection Agency's P3 (People, Prosperity, and the Planet) Sustainable Design Competition Honor Mention, and an MIT Molina Fellowship. Two different Chilean publications, El Mercurio and Diario Financiero, have listed this UI engineer among their nation's top 100 young leaders.  Truly a force for political and environmental progress, Marcelo Mena-Carrasco and his groundbreaking work will ensure the world is a cleaner place to live. Mena was presented the UI Alumni Association Distinguished Young Alumnus Award in 2013.