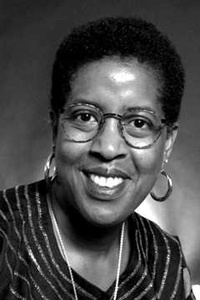 Dr. Lilia A. Abron is the first African-American woman in the nation, and the third woman at the UI, to receive a doctorate in chemical engineering. In 1978, she became the founder and CEO of PEER Consultants, PC, an environmental consulting firm headquartered in Washington DC. The firm has grown to included branch offices in 10 major cities throughout the United States. Beyond her work at PEER, Abron has been active in a number of community organizations, including serving as president of the Washington DC chapter of Jack and Jill of American, Inc., and as a board member for the Baptist Home for Children. She also plays hand bells in the Angelus Bell Choir at her church. A registered Professional Engineer, Abron is a member of several professional and technical societies, including the Water Environmental Federation, the American Society of Civil Engineers, the American Water Works Association, the Society of Sigma Xi, and the American Association of University Women. She also serves on the Board of Registration of Professional Engineers for the District of Columbia and the Engineering Advisory Board for the National Science Foundation. In addition, Abron uses her business acumen and engineering expertise to promote science education in primary and secondary schools. Her company supports science fair projects by purchasing equipment and supplies for students, and Abron encourages PEER staff to work with children in their neighborhood schools. Se serves as a mentor for several students each year. Active on the lecture circuit, she has visited The University of Iowa often to urge UI engineering students to serve as role models and mentors for school children, and has served on the College's Advisory Board and the Advisory Board of the Chemical and Biochemical Engineering Department. Abron is a life member of the UI Alumni Association and received the UI Hancher-Finkbine Alumni Medallion in 1999. In 2004, Abron was elected a Fellow of the American Academy of Arts and Sciences.