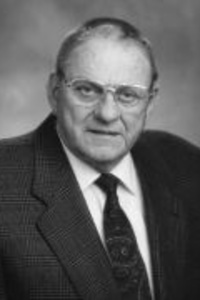 Joseph B. Summers earned his degree at The University of Iowa following wartime service as a bomber crew member in Europe with the U. S. Army Air Corps. Leaving his native Iowa after graduation, he made a profound impact on water conservation and preservation in the water-starved West. For almost 40 years, Summers Engineering in Hanford, California, has provided consultation services to major irrigation and drainage projects around the world. After beginning his career with the U.S. Bureau of Reclamation in Denver, Colorado, where he also earned a Master's degree from Colorado University, Mr. Summers joined Chicago's Harza Engineering Company, and later became an assistant irrigation engineer for the Modesto Irrigation District, one of California's major water agencies. In 1962, he launched his own firm after three California irrigation districts and government agencies asked him to increase the productivity of 200,000 acres of arable land. Today, the company has created a legacy of high-quality projects fro urban water supply agencies and irrigation districts. In 1972, Mr. Summers served as a United Nations consultant on irrigation and drainage in the Pampas region of Argentina. In 1986, the U.S. Committee on Irrigation and Drainage named him national Chair of a series of four regional meetings on toxic substances in agricultural water supply and drainage.

Four years later, he led one of the largest, most complex water conservation negotiations in U.S. history. As chair of an oversight committee for the massive water conservation program, Mr. Summers helped craft a $100 million agreement between giant Metropolitan Water District of Southern California and the largely agricultural Imperial Irrigation District at the southern tip of the state. In 1981, he was the U. S. representative on a panel of water experts at the 11th Congress of the International Commission on Irrigation and Drainage, held in Grenoble, France. In 1999, he received the inaugural Merriam Improved Irrigation Award from the U. S. Committee on Irrigation and Drainage. Mr. Summers was President of the Hanford, California, Community Foundation. He also applied his extensive water resources experience to a passion he had – farming 210 acres of walnuts in California. Until his death in 2006, he had not forgotten his Iowa roots. He served on the College of Engineering Development Council and Advisory Board, and was a member of the College’s Campaign Steering Committee. Mr. Summers generously endowed the Rose & Joseph Summers Chair in Water Resources Engineering, the naming of which honors Summers' late wife, through gifts to the University of Iowa Foundation.