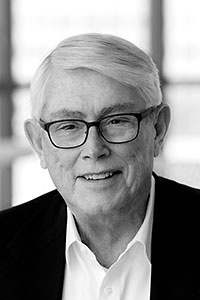 Jim Whitely founded Vail Systems in 1991 in an effort to make conversations better through technology. He gravitated towards computing, inspired by a mentor who told him, “It is the only invention that extends the human mind.” He has since used his passion to create and grow a successful business that leads its industry. His 35 years of computer and telecommunications start- up experience has driven Vail’s direction and innovation through different phases, from a physical box in a dedicated building to, most recently, the cloud.

Following his mentor’s advice, Whitely, now Vail Systems CEO, accepted a position as a student at the University of Iowa’s Computer Center in 1961, where he created a consulting business for the university by taking on outside projects for many organizations, including the Department of Defense, Time Inc., and AG Becker & Co.

After over a decade in Iowa City, Whiteley moved to Chicago, engaging in the burgeoning entrepreneurial computer culture there. In the 1970’s and 1980’s, he constructed large computer systems for an investment banking firm, ran a computer services bureau company, and was a principal in SEI, a large computer-consulting firm. Whiteley also started his own consulting company and was involved in founding ten other companies during this period. One of these companies involved a great business idea — answering calls with a computer — but was restricted to physical locations.

Whiteley founded Vail on the idea voice communication can be enhanced using technology. He moved his business idea off premise and onto the telephone line, successfully moving the logic to the network.

Vail still uses the first principals Whiteley learned at Iowa: work to make people around you better, revision is about making things better; and most importantly, the proper use of technology can change the world.

Whiteley is also the founder and board member of Vail’s sister company Versay® Solutions, a CX design and application solutions agency based in Chicago that helps companies build compelling customer experiences on any communications platform.