MS 1954 in Mechanics and Hydraulics 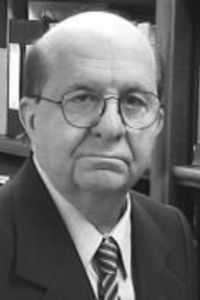 Henry Maksoud was a Brazilian entrepreneur, born in the town of Aquidauana in the State of Mato Grosso do Sul on March 8, 1929.  As a son of Lebanese immigrants, Maksoud fully inherited the entrepreneurship, sense of accomplishment, creativeness, and managerial characteristics of his ancestors.

Mr. Maksoud earned both his Civil and Electrical Engineering degrees from Mackenzie University in Sao Paulo Brazil in 1951, and his Master’s degree in Mechanics and Hydraulics from The University of Iowa in 1954.

Until his death in 2014, Mr. Maksoud's professional and entrepreneurial career was marked by continuous and diversified undertakings in the fields of engineering, publishing, industrial, and hospitality business. His enterprises are based on the principle of providing integrated services with innovative techniques and excellence.

In 1958, he founded HIDROSERVICE, an engineering consulting and project management company that became, during several years, one of the largest in its field in the world. Notable projects include Rio de Janeiro International Airport, Brazil Air Traffic Control and Defense System, Itaparica 5000 MW Hydroelectric Project, Acominas, and the Nigeria National Telecommunications System.

For over 15 years Mr. Maksoud was the owner and publisher of VISÃO magazine -- one of Brazil's largest weekly news magazines -- as well as four technical publications in construction, rural development, industrial, and city management. During four years from 1988 he presented a television nationwide talk show of discussions mainly on political economy. Besides giving talks in Universities and professional associations he also published a large number of articles and several books on freedom, inflation and economics, including a complete proposal for a Constitution for Brazil, presented and discussed in his magazine as an alternative during the summit of the National Constitutional Congress assembled to write and vote the New Constitution of 1988.

In the field of informatics, Mr. Maksoud founded SISCO, now called KXYZ-Information Technology, a computer and software manufacturing, systems integration, special applications and maintenance services company that was recognized by the market as a reliable and superior performance computer company with a high commitment to technology and services. SISCO, together with HIDROSERVICE, developed, for instance, the complete operations software for the Rio de Janeiro International Airport.

Based on the engineering competence of HIDROSERVICE and SISCO, Mr. Maksoud started his hospitality enterprise HM Hoteis e Turismo, with the mission of developing a level of services never experienced in Brazil before, comparable to, and in most cases superior to, the best available worldwide. The Maksoud Plaza, a 5-Star hotel designed and operated under his own management and stringent demands for comfort, quality and services set new standards for hospitality and elegance and remains, after 23 years, as a city landmark recognized internationally by the specialized media as "One of the fifty best hotels in the world" and considered by the world celebrated magazine WALLPAPER, in 2001, as " The Best Independent Hotel.”