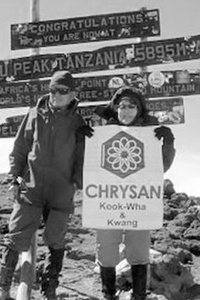 Drs. Kwang-Kuk and Kook-Wha Koh are the first husband-wife inductees to the University of Iowa Distinguished Engineering Alumni Academy. They are remarkable examples of individuals who obtained their graduate degrees at Iowa and went on to distinguished careers in business, while giving back in meaningful ways to their communities.  Kwang-Kuk and Kook-Wha Koh arrived in Iowa City in the mid-1960s to pursue graduate studies in the then named Department of Chemical Engineering. The couple met as children and both earned BS degrees in chemical engineering at Seoul National University. Married in 1963, they decided to continue their engineering studies in the United States, both working on research projects related to the newly established filed of membrane separations pioneered by University of Iowa professor and chair Karl Kammermeyer. Kwang-Kuk completed his PhD in 1968 under the supervision of Karl Kammermeyer. His thesis, Characterization of Porous Media by Frequency Response Analysis, provided new approaches to characterize porous media for use in novel separation applications. Kook-Wha received her PhD in 1970 under the supervision of Prof. James (J.O.) Osburn. Her thesis, Crystallinity and Density in Permeation of Carbon Dioxide and Water Vapor through Polymers, focused on better understanding aspects of polymers as they influence separations with the goal of developing better membranes for specific separation applications.  After earning their PhD degrees, the Kohs moved to Baytown, TX, where Kwang joined Esso (the international affiliate of ExxonMobil), where he worked in the synthetic fuel program for coal gasification. Eager to continue her own professional trajectory, Kook-Wha secured a postdoctoral fellowship at Rice University where she joined the renowned artificial heart program led by Michael DeBakey, MD. Eight years later, the Kohs moved to Detroit where Kwang began working for American Natural Resources (now Coastal Corp in Houston, TX) as an administrator in coal technology. For Kook-Wha, the change of venue also meant a change of career direction when she seized the opportunity to launch a new commercial venture: Chrysan Industries, Inc. Born in November 1977 and headquartered in Plymouth, MI, the company has become a leading global supplier of automotive lubricants and specialty chemicals. Chrysan (the name means “chrysanthemum” in Korean) owns several patents in metalworking fluid technology, formulated cutting oils, and synthetic coolants, and has repeatedly been recognized for product and supplier excellence by major manufacturers such as General Motors and Ford. The company exports to and has established distributors in Asia, Africa, and South America.  As Chrysan’s profits began to demonstrate that connection in a significant way, Kwang joined the company in 1985. The Kohs’ chemist son, Suk-Kyu, now serves as company president and CEO.  Although Kwang and Kook-Wha officially retired in 2006, Kook-Wha continues to work there when they are not traveling—and they have taken on traveling with as much passion and dedication as they devoted to their academic and professional careers. They recently were on a mission to visit a National Geographic list of the 50 places everyone should see in their lifetimes (they have seen all but one till we have one place to go, Seychelles in Africa). They also wrote a book together, Hopping Seven Continents, which documents their travel adventures, including their ascent of Mount Kilimanjaro, which at 19,341 feet is the tallest free-standing mountain in the world. Through their actions and efforts they have dedicated themselves to  ”promote and ensure equal opportunities for minority business enterprises and women-owned businesses…and we recognized the importance and encourage the balance of career, family, health and fitness, and faith.”