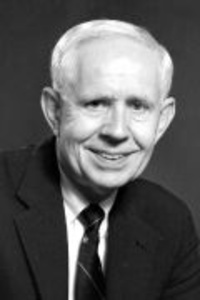 Dr. Richard E. Emmert is a chemical engineer and retired executive whose expertise in chemical reaction technology and mass transfer has been recognized by many career honors. Most of Dr. Emmert's professional career was with the DuPont Company, from which he retired as Vice President-Electronics after 34 years of service. Earlier, he served as Vice President-Corporate Plans, General Manager-Textile Fibers, Director-Instrument Products, R&D Director-Pigments, Director-Engineering Technology and Materials Research, and in numerous manufacturing and research and development positions. In 1988, Dr. Emmert was named Executive Director of the American Institute of Chemical Engineers from which he retired in 1996. After receiving his Bachelor of Science degree in Chemical Engineering with highest distinction at the UI in 1951, Dr. Emmert went on to earn his master's and doctorate degrees in chemical engineering from the University of Delaware. He has been honored with both universities’ distinguished alumni awards and with election to the National Academy of Engineering, the highest professional honor that the engineering profession can bestow upon an individual. He also holds an honorary Doctor of Science degree from Manhattan College.

Dr. Emmert is a native of Iowa City and has always given of his time and talent to The University of Iowa and the College of Engineering. He previously served on the UI Engineering Advisory Board and Engineering Development Council, and the Board of Directors of the UI Alumni Association.