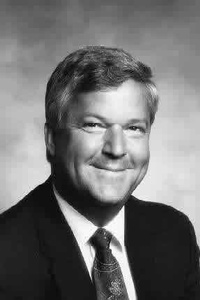 L.D. McMullen is Water Resources Practice Leader for Snyder & Associates, Ankeny, IA, an engineering consulting firm.  He is retired CEO and general manager of the Des Moines, IA, Water Works. His career spans 50 years in the environmental engineering field.  He has been recognized at both the national and regional levels for his contributions toward producing safe and quality drinking water. During the Midwest Floods of 1993, he and his staff received nationwide attention for their engineering accomplishments in restoring drinking water to Des Moines. In 1998, Dr. McMullen and his staff completed one of the Upper Midwest's largest "design and build" concept water plant projects.

In April 1998, he completed a four-year term as Chair of the UI College of Engineering Advisory Board, and in 2002 he completed his term as executive board member of the UI Alumni Association after having served as president of the organization's board of directors for 2000-2001 - the first engineering alumnus to serve in that position. He also has received the UI Alumni Association's Distinguished Alumni Award for Service besides being a member of the College's Distinguished Alumni Academy.