PhD 1951 in Mechanics and Hydraulics 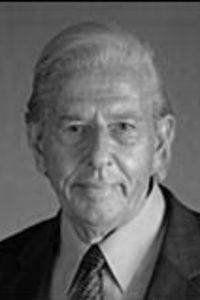 John Piña Craven was born in Brooklyn, New York in 1924. He held a Bachelor of Arts degree from Cornell University, a Master of Science degree from the California Institute of Technology, a Ph.D. from the University of Iowa, and a law degree from the National Law Center of the George Washington University.

Craven had 40 years of experience in the innovation, development, design, construction and operational deployment of major oceanic systems. As a boy, he studied ocean technology at the Brooklyn Technical High School, and he became familiar with the ocean on the beaches of Long Island and on the waterfront of New York City.

After earning his Ph.D. at Iowa, Craven worked at the David Taylor Model Basin of the Naval Surface Warfare Center at Carderock, Maryland, working on nuclear submarine hull designs. He received two civilian service awards in connection with these developments. He was later appointed as the Project Manager for the Navy's Polaris submarine program, and also the Navy's Special Projects Office. He later became its Chief Scientist. Craven was awarded two Distinguished Civilian Service Awards (the Department of Defense’s highest honor for civilians) among other commendations.

While working for the Navy, Craven helped pioneer the use of Bayesian search techniques to locate objects lost at sea (Bayesian search theory). Craven's work was instrumental in the Navy's search for the missing hydrogen bomb that had been lost in the Mediterranean Sea, off the coast of Spain in 1966. Craven's next large accomplishment was in the search for and locating of the submarine USS Scorpion (SSN-589), which had disappeared in deep water in the Atlantic Ocean west of Portugal and Spain.

As Chief Scientist of the Special Projects Office, Craven was in charge of the Deep Submergence Systems Project, which included the SEALAB program. In February 1969, when aquanaut Berry L. Cannon died while attempting to repair a leak in SEALAB III, Craven headed an advisory group that determined the best method of salvaging the SEALAB habitat.

After leaving the Navy, Craven became the Marine Affairs Coordinator for the State of Hawaii and also the Dean of marine programs at the University of Hawaii. During his time in Hawaii, it has been alleged that Craven was involved in the development and operation of the secretive salvage ship, Glomar Explorer, built to follow up on the discovery of a sunken Soviet submarine, the K129, by other of Craven's projects, a nuclear-powered submarine spy ship called Halibut.

Craven also served during the Carter Administration on the U.S. government's Weather Modification Commission. During that time, a hypothetical method was developed to significantly reduce the impact of tropical cyclones. In 1976, after losing in his campaign to become a member of the United States House of Representatives, Craven was appointed as the Director of the Law of the Sea Institute. In 2001, he was the president of the Common Heritage Corporation.

After having earned his law degree through degree program at night, Craven was responsible for the direction of the International Law of the Sea Institute. In 1990 he established the Common Heritage Corporation for the management of innovation for the benefit of the common heritage of mankind. Craven was a member of the National Academy of Engineering.

Craven's latest undertaking before his death in 2015 was to link islands in the Pacific Ocean with sustainable energy, agriculture, and fresh water through the use of Deep Ocean Water pumped up using pipes from offshore. He was developing a new and innovative cold water therapy, which may produce significant health breakthroughs and slow the aging process. (Wired Magazine, Issue 13.06, June 2005).

Craven also wrote the book, The Silent War: The Cold War Battle Beneath the Sea.