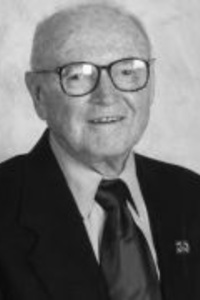 Hugh D. Guthrie was senior management and technical advisor with the Strategic Center for Natural Gas at the National Energy Technology Laboratory as the time of his death in early 2007. He earned a B.S. degree (with highest honors) in chemical engineering from Iowa in 1943. His extensive experience included 33 years with Shell Oil Company as an engineer, senior technologist, group leader, and senior staff member. He also served as division director with the Energy Research and Development Association, director of the Energy Center at Stanford Research Institute, manager of technical assessment at Occidental Research Corporation, and member of the Engineering Advisory Boards at The University of Iowa and the University of California at Berkeley. Guthrie was a Fellow and former president of the American Institute of Chemical Engineering, and a member of the American Association for the Advancement of Science, the American Chemical Society, Society of Petroleum Engineers, and the New York Academy of Science. His achievements included patents on distillation equipment. A leading technical expert on oil shale, he worked to build partnerships and support for the conversion of organic material in oil shale to oil. He was the co-author of a book, titled "The Strategic Significance of America's Oil Shale Resource."