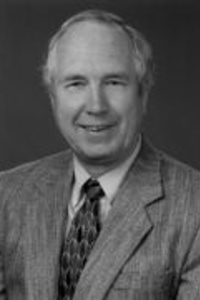 Dr. Donald A. Gurnett (BS 1962 in Electrical Engineering), Carver/James A. Van Allen Professor of Physics at The University of Iowa is a world leader in the field of space plasma physics. A UI faculty member since 1965, Dr. Gurnett's early discoveries and investigations include measurements showing that the Earth's aurora is a source of intense low-frequency radio emissions. In 1993 Dr. Gurnett and his colleagues reported the first direct evidence of the distance to the heliopause, the boundary between our solar system and interstellar space.

Dr. Gurnett began his engineering and science career by working on spacecraft electronics design as a student employee in the UI Physics Department in 1958, shortly after the launch of the first spacecraft, Explorer 1. After serving as Project Engineer for two UI spacecraft projects in the early 1960s and receiving his bachelor of science degree from the UI College of Engineering in 1962, he switched to the College of Liberal Arts where he received his MS degree in 1963 and his doctorate, under the direction of Van Allen, in 1965. He has participated as a principal investigator or co-investigator on more than 25 major spacecraft projects, including the Voyager 1 and Voyager 2 flights to the outer planets, the Galileo mission to Jupiter, and the Cassini mission to Saturn. The author or co-author of more than 320 scientific publications, he spent one year on a NASA traineeship at Stanford University, one year on leave as an Alexander von Humboldt Senior Scientist at the Max-Planck Institute for Extraterrestrial Physics, Garching, Germany and one year on leave as a visiting professor at the University of California, Los Angeles.

Dr. Gurnett is a member of the National Academy of Science, International Scientific Radio Union (URSI), a Fellow of the American Geophysical Union, a Fellow of the American Physical Society and a member of the Iowa Academy of Science (IAS). He has served as a member of the NAS Committee on Space Physics and Solar Terrestrial Research and the NAS Committee for Planetary and Lunar Exploration. His other honors include: URSI John Howard Dellinger Gold Medal for distinguished research in radio physics; American Physical Society Prize for Excellence in Plasma Physics; NASA Space Act Award, for work on spacecraft instrument development; John Adam Fleming Medal from the American Geophysical Union; and NASA Distinguished Scientific Achievement Award for work on plasma waves and radio emission from the outer planets. In December 2005, he was awarded the Hannes Alfvén Medal by the European Geosciences Union (EGU) for his contributions to solar-terrestrial and planetary solar system sciences.