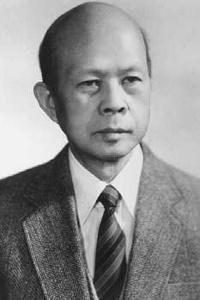 Dr. Lin Bingnan, senior academician of Chinese Academy of Science, honorary member of IAHR and honorary president of China Institute of Water Resources and Hydropower Research (IWHR) was one of the world's most outstanding hydraulic engineers. He came to The University of Iowa after being selected by his government in national competition for advanced study in the United States.

Long devoted to the research and application of hydraulics and river dynamics, he made extraordinary accomplishments in a wide range of research topics, including unsteady open-channel flow, high-velocity flow, wave of dam break and reservoir sedimentation. He was also among the first scientists simulating unsteady flow field with mathematical method, and one of the inventors of new type of energy dissipator of flaring gate piers for high-dam flow.

Dr. Lin returned to his native China in 1955 and since 1958 has held a series of responsible posts at IWHR, which is the research and testing organization for the electric-power and water-management activities of a nation of more than one billion people. His unique qualifications as an engineering/scientific researcher, his inventiveness as a hydraulic engineer, and his ability as an administrator led to the prestigious position of director in 1982. During his tenure as director of IWHR, Dr. Lin upgraded its capabilities and broadened its field of activities to include such concerns as environmental engineering. He also worked to renew the international involvement of IWHR in the world community of engineers. One of the first cooperative agreements he established as director of IWHR was with the UI.

Dr. Lin helped the Chinese government conceive and organize, with UNESCO support, the International Research and Training Center on Erosion and Sedimentation (IRTCES), an organization which has become, through his leadership, one of the world's largest and most active in its concern for sediment erosion and deposition problems.

Dr. Lin made great efforts for the development of IAHR Asia and Pacific Regional Division as the chair from 1991 to 1996. One of the initiators of IAHR China Chapter, as well as one of the founders of International Research and Training Center on Erosion and Sedimentation (IRTCES) and World Association for Sedimentation and Erosion Research (WASER), he was also the visiting professor of Tsinghua University and Colorado State University. He served as chairman of the advisory council of IRTCES from 1984 to 2000 and the chairman of expert panel for the Three Gorges project from 1985 to 1993.

In another of his achievements, Dr. Lin was able to resolve the many extremely difficult problems involved in the construction and operation of several large dams in China, including the Three Gorges Dam, located some 40 kilometers upstream from Gezhouba Dam on the Yangtze River. His scholarship, engineering ingenuity, and scientific acumen are well recognized among his peers, which is why in 1985, the American Society of Engineers invited Dr. Lin to present the inaugural address at its first annual lecture by distinguished foreign hydraulic engineers.

Prior to his death in 2014, Dr. Lin held the position of Chief of the Sedimentation Panel for the Office of Three Gorges Engineering Commission, China State Council; Director Emeritus of the Institute of Water Conservancy and Hydroelectric Power Research (IWHR); Chairman of the Advisory Council for the International Research and Training Center on Erosion and Sedimentation (IRTCES); and was a member of The Chinese Academy of Sciences (CAS).