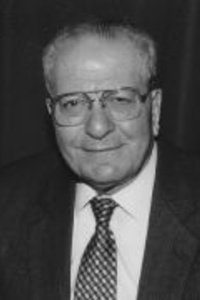 Dr. Abdel-Aziz A. Fouad (MS 1953 in Electrical Engineering) was a pioneer in the electrical engineering field of power systems dynamics and stability, most notably in his visionary contributions to academic research, teaching and publication, collaboration between academia and the power industry and early explorations of technology and social change.

Among numerous professional recognitions, Dr. Fouad was elected to the U.S. National Academy of Engineering, was an Anson Marston Distinguished Professor, received the Anson Marson Medal from the Iowa State University (ISU) Alumni Foundation, and is a Fellow of the Institute of Electrical and Electronics Engineers (IEEE). In over 35 years at ISU, Dr. Fouad taught multiple classes, including creation of several early computer-based educational courses, and authored more than 100 publications in his field. He also served as a visiting professor at the University of Phillipines, the Federal University of Rio de Janeiro, Brazil, and the Electric Power Research Institute of Palo Alto, CA.  One of his most enduring contributions to academic and industry collaboration was co-founding ISU's Power Affiliate Research Program in 1963, known since 1988 as ISU's Electric Power Research Center.

Dr. Fouad’s industrial experience includes engineering assignments with the Cairo Gas and Electricity Administration, Rio de Janeiro Light and Traction Company, Jersey Production Research Company, and Atomics International. He also worked as a project manager with the Electric Power Research Institute’s Electrical Systems Division. In 1997-1998, he was asked by the Strategic Science and Technology Program of the same institute to conduct a study on the future power delivery systems for North American Interconnected Electrical Power Network.

Dr. Fouad is co-author of two books -- Power System Control and Stability which was translated into Russian and Chinese, and Power System Transient Stability Analysis Using the Transient Energy Function Method. He also authored and co-authored several chapters in books, some computer-based educational courses, and more than 100 publications in his field. In addition to his work in power system engineering, Dr. Fouad founded an Interdisciplinary Graduate Program on “Technology and Social Change in Foreign Cultures” at Iowa State University. He chaired the program from 1972 until 1978. Because of his involvement with the issue of technology and social change, Dr. Fouad was asked to serve as a member of the Commission on International Relations of the U. S. National Research Council from 1975-1978. Dr. Fouad is a Fellow of the Institute of Electrical and Electronics Engineers (IEEE). He also was named Outstanding Power Engineering Educator, and received the Herman Halperin Electric Transmission and Distribution Award from IEEE.