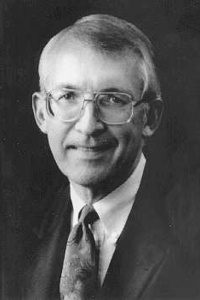 Darrell D. Wyrick, who devoted almost all his business career to The University of Iowa, is recognized as a leader in the field of educational development and fund-raising at the local, state, and national level. He was employed as an engineer following graduation in Minneapolis, MN, before joining the UI Foundation, which is an independent, self-supporting, nonprofit corporation founded in 1956, whose purpose is to raise private funds for the University. Hired in 1962 as the first full-time employee of the Foundation, he oversaw the growth of the Foundation into a multimillion dollar organization with a full-time staff of more than 100. Over his career, contributions to the Foundation exceeded one-half billion dollars. In July 1998, after more than 36 years of service, Mr. Wyrick retired as president of the Foundation.  He died in 2015.

Mr. Wyrick's work at the Foundation, including raising funds for dozens of new buildings, renovations and programs, helped to change the face of the UI campus. During his tenure at the Foundation, constituent fund-raising programs for 10 colleges, 25 departments and schools and many other University units such as men's and women's athletics, the Museum of Art, Hancher Auditorium, University Libraries, etc., were developed and coordinated by the Foundation. Its system of honor clubs, planned giving program and leading-edge computer and management information systems for the Foundation all were developed under his guidance, as well as building and mobilizing a staff and a volunteer network devoted to the success of both the Foundation and the University. Under his leadership, the Foundation conducted more than 20 single-purpose capital campaigns, raising money for capital improvement projects ranging from the Museum of Art, Health Sciences Library, Alumni Center, Iowa Hall in the Museum of Natural History, Carver-Hawkeye Arena, and the College of Business Administration Building to the restoration of the Old Capitol, the conversion of the Field House to recreation facilities, the furnishing of Hancher Auditorium, and most notably the College of Engineering Seaman's Center for the Engineering Arts and Sciences.

A major success of the Foundation's efforts under Mr. Wyrick's direction was the Iowa Endowment 2000 Campaign, a national capital campaign begun in 1985 to secure $150 million in educational endowments. The IE2000 Campaign created more than 50 endowed faculty chairs, more than 120 endowed graduate fellowships and general endowments for each of the University's ten colleges. By reaching the $225 million level in five years, it exceeded its goal by more than 50 percent.

Mr. Wyrick served on the board of directors for the UI Research Foundation and the UI Alumni Association. He was a member of the Old Capitol Club and the College of Engineering Development Council and served on the Advisory Committee for the UI Museum of Art. He also served as a member of the college's Engineering Building Campaign Steering Committee and was President of the UI Facilities Corporation. He was a member of the University of Iowa Presidents Club, an honorary member of tech National Iowa Lettermen's Club, and was a 1992 recipient of the UI Distinguished Alumni Award of Service. He was named Hawk of the Year in 1996 and was an honorary member of the National I-Club Board of Directors. He was grand marshal of the 1997 UI Homecoming Parade. In April 2006, Mr. Wyrick received the UI Hancher-Finkbine Alumni Medallion.