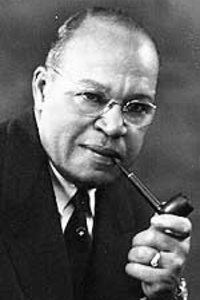 While still a young man, Archie Alexander broke through two deeply entrenched barriers.  He was the second African-American football player at the University of Iowa and the first African-American to receive a civil engineering degree from the UI in 1912.  Alexander was born in Ottumwa, Iowa, the son of a janitor and coachman.  After enrolling at the University of Iowa, he played tackle from 1909 to 1911.  Upon graduation, Alexander worked as a foreman for a bridge-building company before going into business for himself in 1917. He studied bridge design in London, England in 1921. In 1929, he started his own company when he was only 26.  After that, in sequence, he established two engineering partnerships.  Alexander & Repass built freeways and apartments, airfields, sewage systems, power plants and trestles. The firm was responsible for the construction of the Whitehurst Freeway, the Tidal Basin Bridge, and an extension to the Baltimore-Washington Parkway. With his business partner, George Higbee, Alexander designed the Tuskegee Airfield and the UI central heating plant, its power plant, and a major steam tunnel beneath the Iowa River.  In 1934, Alexander was appointed as one of a 12-member commission to investigate the social and economic conditions in Haiti. In 1946, he was awarded an Honorary Doctor of Engineering by Howard University.  Alexander was appointed Governor of the United States Virgin Islands by President Dwight D. Eisenhower in 1954 -- the first Republican governor there since the establishment of the civil government.  In 1947, the UI named Alexander one of 100 outstanding alumni among 30,000 graduates.