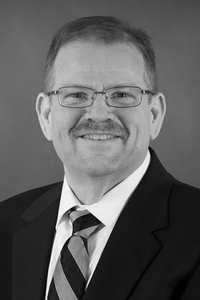 Dr. Alexander N. Cartwright is an internationally recognized researcher and scholar in the area of optical sensors. In August 2017, he became Chancellor of the University of Missouri, coming to MU from the State University of New York (SUNY) where he served as provost and executive vice chancellor from September 2014 to July 2017. The University of Missouri is the flagship institution of higher education in Missouri.

At SUNY Dr. Cartwright supported the chancellor and board of trustees in overseeing the 64-campus system. He drove academic policy and oversaw a broad portfolio, including access and inclusion; academic program planning and assessment; enrollment management; student success; global affairs; information technology; and, SUNY’s broad research enterprise. He refocused SUNY’s academic agenda around the overarching areas of student success and completion; diversity, equity and inclusion; and, through research growth in emerging areas, increasing SUNY’s impact on state and global challenges.

A native of the Bahamas, Dr. Cartwright believes in inclusive excellence wherein an institution cannot achieve excellence if it is not inclusive. At SUNY he developed a comprehensive completion model to meet SUNY’s ambitious goal of ensuring that more New Yorkers earn the credentials they need to succeed. He launched a system-wide educational effectiveness and strategic enrollment process designed to support each campus in meeting improvement goals. He also served as acting president of the Research Foundation for SUNY from January 2015 to June 2016, overseeing the Foundation’s management of over $1 billion dollars in annual sponsored research activity and recommitting the organization to focus on creation of a culture of compliance, transparent administration of sponsored research; and supporting campus efforts to commercialize intellectual property created on campuses.

Dr. Cartwright’s research includes engineering optical “metamaterials,” artificial materials that provide optical properties not readily available in nature. His technology for fabricating a rainbow-colored polymer using a one-step, low-cost holographic lithography method was one of just five inventions worldwide to be named to the Society of Manufacturing Engineers (SME)’s 2013 list of Innovations that Could Change the Way You Manufacture.

In November 2016, Dr. Cartwright was named a Fellow of the American Association for the Advancement of Science (AAAS). He was recognized for, “outstanding research, teaching and mentorship in optics, for advancing science in New York, nationally, and internationally, and for strengthening diversity and inclusion in science.” He was also named to the Carnegie Math Pathways Advisory Board by the Carnegie Foundation for the Advancement of Teaching (2016); appointed by New York Governor Andrew Cuomo to the Photonics Institute Board of Officers (2015); and earned appointment as a Fellow of the National Academy of Inventors (2014). Dr. Cartwright is a Fellow of SPIE—The International Society for Optical Engineering; a senior member of the Institute of Electrical and Electronics Engineers (IEEE); a member of the American Society for Engineering Education (ASEE), Eta Kappa Nu, and the Materials Research Society (MRS).