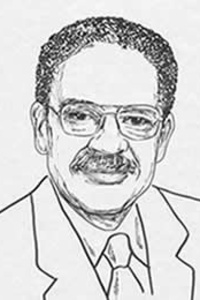 Phil Hubbard’s life and career advanced the university for half a century. After receiving UI bachelor (Electrical Engineering), M.S. and Ph.D. (Mechanics and Hydraulics) degrees, he climbed academic ranks to professor. At IIHR, he developed innovative instrumentation and fluids data-acquisition techniques. Stepping into university administration, Hubbard led UI toward racial equality, thus reshaping its future. Praised for his mental agility and for being the first African-American in several administrative positions, including the first vice president in a Big Ten university, he is perhaps better remembered for his fine human qualities: his strong but kindly manner, and the patience, persistence, and leadership that he demonstrated as counsel to six UI presidents.