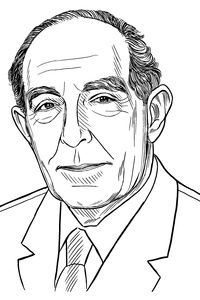 Lou Landweber had a thirst for knowledge that never ran dry.  Soft-spoken, he was renowned for his problem-solving approach.  He offered any visitor a chair alongside his own desk, pulled out a writing shelf, positioned his pencil and writing pad, and gently talked the visitor through the problem, step by step.  Landweber’s career at IIHR—Hydroscience & Engineering was among the longest and most productive in its history.  Under his guidance, IIHR became a national leader in naval architecture and ship hydrodynamics research.  But his more than 50 MS and PhD students remember him best for his integrity, warmth, support, and humor—characteristics that rival even his vast technical achievements.