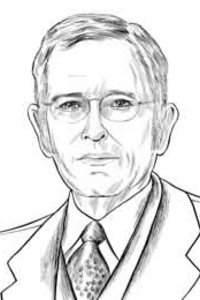 The fundamentals of engineering drawing are almost synonymous with Professor Higbee. Transcending three generations of graduates from The University of Iowa, he is renowned for contributing significantly to the philosophy and technique of teaching engineering students --using engineering drawing as a basis and medium for developing young minds. Consequently, he was the first to be honored with the Engineering Drawing Award from the American Society for Engineering Education. Admirably known on campus as one of President Walter A. Jessup's "Four Horsemen," Higbee's critical advice and counsel helped The University of Iowa regain its position among Big Ten institutions earlier in the 20th Century.