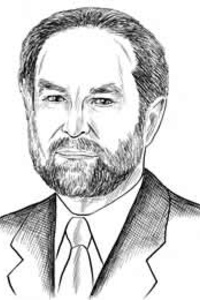 A pioneer in structural optimization and multibody systems dynamics, Ed Haug has had a profound impact in the field.  He mentored dozens of PhD students who became leaders themselves at universities and in industry.  He founded the UI Center for Computer-Aided Design, specializing in virtual prototyping in mechanical system design, and the National Advanced Driving Simulator, the world’s most sophisticated for highway safety research and vehicle design.  With a team of graduate students and post-doctoral graduates, Haug created the computational program DADS, enabling industry and government to enhance vehicular dynamic conditions.  Ultimately, the program evolved into CADSI, Inc., the first spin-off company at the University of Iowa Research Park.