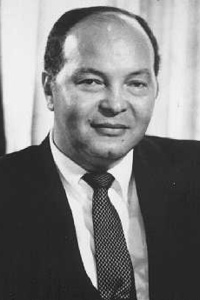 Dr. Clifford V. Smith, Jr. and his father, Clifford V. Smith, Sr. both earned engineering degrees from the UI. While a student, Dr. Smith, Jr. was employed by an engineering firm in Washington, D.C. for five consecutive summers in various engineering positions. He was also active as Treasurer of Kappa Alpha Psi and the student branch of ASCE, and received the Distinguished Military Engineering Student Medal for his exceptional performance in the Military Science Program.

Dr. Smith continued his education at Johns Hopkins University, earning a Master's degree in environmental engineering and a doctorate in Radiological Science. Since that time, he has had a distinguished career as an engineer and administrator, serving in government, industry, and academia. In government, Dr. Smith has served at the Assistant Secretary level of the U.S. Nuclear Regulatory Commission, and as Regional and Deputy Regional Administrator for the U.S. Environmental Protection Agency in Seattle and Boston, respectively. In industry, he has worked for the Bechtel Corporation in San Francisco, one of the world's premier firms dedicated to the construction of large engineering projects. There, he served as Executive Engineer, Program Manager, and Business Development Manager within the Advanced Technology Division. Previous to being chancellor of the University of Wisconsin-Milwaukee from 1986-1990, he held numerous positions within the Oregon State System of Higher Education. There he served as Special Assistant to the Chancellor of the State System for Science Technology and Economic Development and Director of the Council for Advanced Science, Engineering Education, and Research for Industry. He also held the number two position at Oregon State University, serving as Vice President for Administration and has held a joint appointment as Director of the Radiation Center, Director of the Institute for Nuclear Science and Engineering, and Head of the Department of Nuclear Engineering. He has also held positions from Instructor to Professor of engineering at several universities in the East.

Dr. Smith's many honors include the Environmental Protection Agency highest award, the Gold Medal for exceptional service. He is a registered professional engineer, the author of many articles in the technical literature, and a member of several professional societies. He has been a member of national committees such as the Radiation Advisory Committee of the U.S. EPA Science Advisory Board, a member of the U.S. NASA Advisory Council, and a member of the Energy Research Advisory Board of the U.S. Department of Energy. He has been a consultant to the National Science Foundation as well as many industrial and governmental organizations such as Bechtel, Rockwell International, U.S. Department of Energy, and the U.S. Nuclear Regulatory Commission. He retired in 1997 as the President of the General Electric Foundation in Fairfield, Connecticut, and is a member of the College of Engineering Development Council. He also served on the Engineering Building Campaign Steering Committee. He is a 1992 recipient of the UI Distinguished Alumni Award for Achievement, a member of the Alumni Association, and the UI Foundation Board of Directors and President's Club.