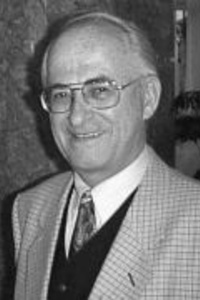 Dr. Helmut E. Kobus is an internationally respected researcher and educator in the hydrosciences and engineering. He is Director of the Institut für Wasserbau in Stuttgart, Germany and is past President of the International Association of Hydraulic Engineering and Research (IAHR). Dr. Kobus has been recognized for his research in environmental fluid mechanics, groundwater hydraulics, groundwater management, hydraulic modeling, air-water mixtures, and structural hydraulics. He is the author of Hydraulic Model Testing, a standard text at many universities. Shortly before becoming the director of Stuttgart, Germany's, Institute for Hydraulics in 1977, Dr. Kobus recognized a need to broaden its scope of activities to include groundwater hydraulics. He formed a research group and convinced the German government to commit long-term support to carry out his vision. It since has achieved international stature.

A hallmark of Dr. Kobus' tenure as President of the IAHR has been the establishment of the European Engineering Graduate School Environment--Water. Dr. Kobus spearheaded an agreement between The University of Iowa's Department of Civil and Environmental Engineering and the Water Resources Engineering and Management Program institutes at Struttgart for exchange of academic staff and students. He received master's degree in 1963 and a doctorate degree in 1965 in mechanics and hydraulics from The University of Iowa. His career included positions as Research Engineer at the Berlin Towing Tank, as Chief Engineer at the University of Karksruhe and as Visiting Associate at the California Institute of Technology. His received a number of awards, served for many years as the Chairman of the water commission of the German Research Foundation and is currently a member of the UNESCO-IHP Advisory Board.