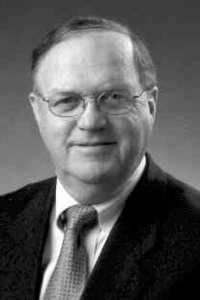 Reininga is retired Senior Vice President of Operations for Rockwell Collins, a leading manufacturer of communication and aviation electronics for commercial, military, and government customers. Mr. Reininga joined the Collins Radio Company in 1965 after graduating from the College of Engineering at The University of Iowa. He developed innovative techniques in the areas of economic scheduling, costing of electronic assemblies, and soldering tool utilization.

Mr. Reininga is recognized for his leadership in integrating commercial and defense manufacturing technology and for his involvement in manufacturing policies, issues, and processes for government and industry. As a result of his leadership, he has received numerous awards including the Department of the Navy Meritorious Public Service Citation in 1999 and the Defense Manufacturing Excellence Award in 1998. In 1996, Rockwell Collins was named one of Industry Week magazine’s Top 10 plants in the U.S. He is a sought-after speaker and panel member by the government and the aerospace and defense industry with more than 25 appearances over the last five years.

Mr. Reininga has been a project reviewer for TARA (the Department of Defense’s Technologies Area Review and Assessment, for the National Science Foundation, and the National Center of Manufacturing Sciences. He also chaired the Technical Advisory Board of the Electronic Industrial Baseline Analysis Committee sponsored by the U.S. Air Force. In addition to his national contributions, Mr. Reininga is a member of the UI College of Engineering Development Council and Mechanical and Industrial Engineering Advisory Board. He is a past member of the College’s Advisory Board, Building Campaign Steering Committee, and Industrial Engineering Interaction Board.