SantosHuman Partners with the Netherlands to Improve Combat Safety, Effectiveness

SantosHuman (SHI), a company that grew out of ongoing research at the University of Iowa, has begun working with the Netherlands Organization for Applied Scientific Research (TNO) to enhance the effectiveness and reduce injuries among that country's military members.

SHI, a spinout of the “Virtual Soldier” research at the UI College of Engineering's Center for Computer Aided Design ( 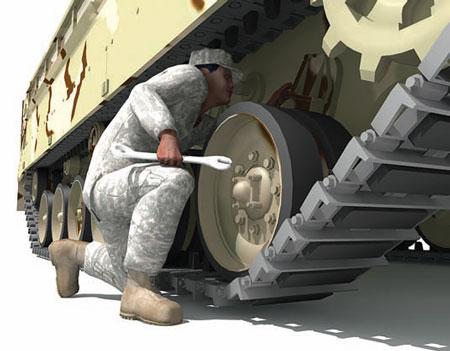 multi-phase program designed to help reduce injuries among members of the Netherlands’ military associated with too-heavy and bulky loads and equipment and enhancing their performance and interaction with equipment.

“Initial efforts will focus on the use of existing Santos Digital Human Modeling & Simulation technologies,” according to a press release announcing the partnership. “Future planned efforts will include the development of new Santos technologies that can leverage existing and future TNO research.”

Nederlandse Organisatie voor Toegepast Natuurwetenschappelijk Onderzoek (TNO for short) is a nonprofit organization in the Netherlands that focuses on applied science and is made up of companies, government bodies and public organizations. Its 3,800 employees work to develop and apply knowledge, making it the largest research institute in the Netherlands.

Steven C. Beck, President and CEO of SHI, said this is the first of what he expects to be several contracts with organizations and businesses in Europe.

“We are excited to be working with this prestigious research organization and look forward to the opportunities that will arise as we develop this important relationship,” Beck said.

Aernout Oudenhuijzen,  Consultant for TNO in the areas of Defense, Security and Safety, said TNO looks forward to learning how SantosHuman Inc.’s virtual soldiers and environments might be used to replace at least a portion of the field tests typically involved in assessing gear and equipment.

“Testing and evaluation of soldier clothing and equipment are currently done in field tests, involving a fair amount of lead-time and related costs,” he said.

The Santos technologies used in all of SHI’s products grew from research and development at the University of Iowa's Virtual Soldier Research (VSR) Program, which began in 2003.  While research in digital human modeling and simulation continues at VSR, SHI has the exclusive license with the University of Iowa’s Research Foundation to commercialize all Santos-related technologies.  SHI’s clients include some of the most recognizable brands in the world.