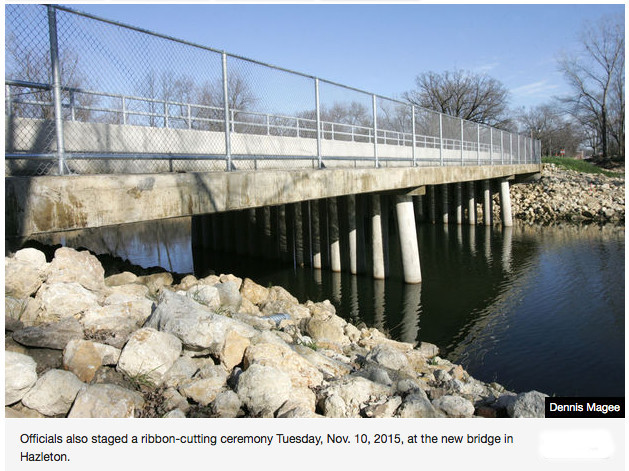 The lure was a ribbon-cutting ceremony for a special bridge in the 1100 block of Deacon Avenue, the first span in the United States utilizing Korean ultra-high performance concrete.

"This particular material is pretty new to the engineering scene," said Brent Phares, director of the ISU Bridge Engineering Center.

The ultra-high performance concrete is very different from traditional mixes in ingredients and properties. The new product uses no aggregate larger than sand but includes short strands of steel not much larger than human hair.

The end result produces concrete up to eight times stronger than a conventional mix, according to David Lee.

He is a professor in the Civil and Environmental Engineering and Public Policy Center at the University of Iowa and director of the college's Laboratory for Advanced Construction Technology.

Lee also noted the steel fiber in the Korean mix is a waste byproduct from the tire manufacturing industry.

Phares and Brian Keierleber, Buchanan County's engineer, serve as advisers to the lab. The Korea Institute of Civil Engineering and Building Technology near Incheon also supports the agency.

The lab studied the Korean ultra-high performance concrete and brought the material in for Buchanan County's bridge.

According to the Federal Highway Administration, ultra-high performance concrete became available commercially in the U.S. in 2000. The agency began looking at applications for its use early on.

Though initially more expensive than traditional concrete, according to the highway administration, ultra-high performance concrete stacks up favorable characteristics quickly:

That means longer, thinner spans are possible, and depending on applications, sometimes traditional reinforcing steel bars aren't even required.

Byung-Suk Kim, an engineer with the Korea Institute of Civil Engineering and Building Technology, said structures like Hawkeye UHPC Bridge in Buchanan County may endure for 200 years. A conventional span would likely only last 50 years and need repairs within 15 to 20 years.

"It's almost maintenance-free, or minimum maintenance," Kim added. "This is very economical."

Ordinary concrete structures deteriorate, in part, because water infiltrates the surface, freezes and thaws. Reinforcing steel tucked inside bridges also corrodes when salt gets in.

Because ultra-high performance concrete is dense, fluids cannot penetrate, according to Phares.

"To me, that is probably the No. 1 quality of the material," he said.

Hawkeye UHPC Bridge is 52 feet long and about 32 feet wide. The span features precast "pi girders" about 5 feet wide and 2 1/2 feet tall. They get their name because a cross-section looks something like the Greek letter Pi.

Because the technology is new, contractors shied away from bidding on the construction project, according to Alec Scranton, dean of Iowa's College of Engineering.

"We had a fairly steep learning curve," Keierleber said. "The test batches became a necessary step for us to work it out."

Scranton and others Tuesday praised the collaborative effort involving federal, state and county agencies and departments and Iowa State and Iowa.