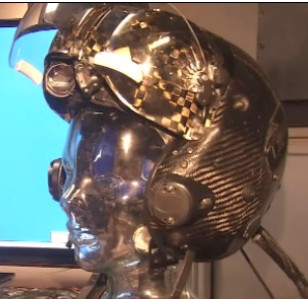 F-35, the nation's most advanced fighter jet.  The high tech helmet, specially fitted to each pilot, provides them with 360-degree situational awareness and allows them to “look through” the aircraft. The jet's Distributed Aperture System, made by Northrop Grumman, streams real-time images from six infrared cameras mounted around the aircraft to the helmet.

The Operator Performance Laboratory (OPL), a unit of the UI Center for Computer-Aided Design, is using a third-generation Strike Eye helmet-mounted display system to do human factors research.

Tom Schnell, associate professor of mechanical and industrial engineering, test pilot, and director of OPL, received a research contract from Wyle Aerospace Group to perform work for the US Air Force 711th Human Performance Wing.  Schnell and his research team at OPL are piloting spatial orientation abilities for F-35 representative helmet-mounted display use in the flight environment. The research is being performed in the OPL's L-29 fighter jet trainer aircraft using close air support (CAS) scenarios that require significant maneuvering and off-boresight viewing (i.e. looks out the side of the canopy rather than forward) by the pilot, a situation that may challenge a pilot's spatial orientation ability under combat conditions.

Rockwell Collins, through its joint venture, Rockwell Collins ESA Vision Systems LLC, also developed the second-generation helmet that F-35 pilots use. More than 200 of the helmets have been delivered for pilots being trained to fly the aircraft.

Lockheed Martin, the manufacturer of the F-35 joint strike fighter, selected Rockwell Collins to supply the helmet-mounted display system. All the information that pilots need to complete their mission is projected on the helmet's visor.