A group of University of Iowa seniors is preparing to reenact the famed discovery of James Van Allen, a UI professor and space scientist whose 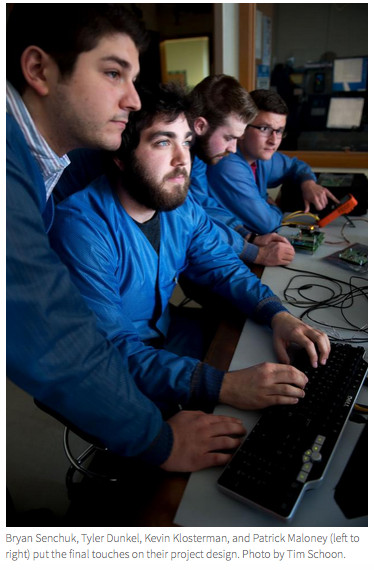 research shed new light on Earth and the solar system.

It was 1958 when Van Allen first discovered the doughnut-shaped zones of highly energized particles that are trapped at high altitudes in Earth’s magnetic field. Appropriately dubbed the Van Allen radiation belts, the discovery would change the understanding of the solar system, and the possibilities therein. Satellites, for instance, can’t spend a lot of time floating around in the belts—the energetic electrons and protons there will fry their sensitive components.

Now thanks to a proposal by the UI Department of Physics and Astronomy, a group of senior electrical and computer engineering students will reenact Van Allen’s original experiment—this time with updated technology. Group members Kevin Klosterman, Bryan Senchuck, Tyler Dunkel, and Patrick Maloney took on the task as a part of their senior design project for the College of Engineering.

“Until we started, I didn’t know much about Van Allen’s original experiment, but it’s been very, very cool to learn more—especially working in the same room Van Allen did,” Klosterman says.

The project has served as a major interdisciplinary learning experience for the engineering students, who didn’t come into it with a background in space physics. They continually had to defend their designs to researchers within physics, a process that often involved some criticism—and amendment—of their ideas.

“We would walk in intimidated, and walk out with a lot more information and reassurance,” says Dunkel. “Being able to defend your work goes a long way.”

The group is trying to figure out how much energy is emanating from the Van Allen belts at a specific altitude. To measure that, they’ve built a radiation sensor attached to a circuit board that will launch into space on a small satellite. There, the radiation sensor will detect energetic particles  from the Van Allen belts. The satellite will sit in a low-Earth orbit and circle the globe every 90 minutes, some data will be transmitted in real time, but all of it is stored for later transmission.

“I feel like we’ve learned something new every day,” Klosterman says.

Not only did the students have to come up with a design concept, write the code to run the device, and build the circuit board by hand, they also had to learn and become licensed ham radio operators as well.

The satellite that the students are using to launch into space is part of the CubeSat program—an initiative supported by NASA to help give students more hands-on experience with space research—and is being constructed by AMSAT, the Radio Amateur Satellite Corporation, whose mission is to foster amateur radio participation in space technology. The data from a full day of operating the experiment will be transmitted from the satellite as it makes a single pass over the CubeSat tracking station on top of Van Allen Hall.

The final result will be a full mapping of the radiation levels at a low Earth orbit. 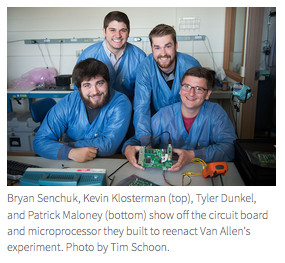 Physics professor Phil Kaaret is hoping to use those results to further more research. Kaaret wants to conduct experiments with low energy X-ray detectors that would fly in a similarly low orbit around Earth, where they could be damaged by radiation. The students’ project could help him determine that he’s sending his X-ray detectors to a safe altitude.

Currently, there aren’t compact and lost-cost monitors of the high radiation levels surrounding Earth at that level, Kaaret says, and the students’ project could be used for that immediate application.

All four students will graduate in May 2015, and Senchuk and Dunkel are remaining at the UI to begin the master’s program in electrical and computer engineering.

The instrument will be delivered to the spacecraft on June 1, with launch later in the year—a fitting commencement for new research, and for the new graduates to launch into their next phase of life.