College of Engineering Is Part of US Engineering School Effort to Educate 20,000 Students to Meet Grand Challenges

In a letter of commitment presented to President Barack Obama at the White House Science Fair today, more than 120 U.S. engineering schools -- including the University of Iowa College of Engineering -- announced 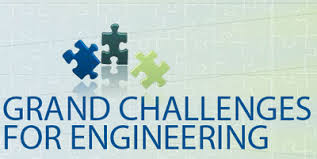 plans to educate a new generation of engineers expressly equipped to tackle some of the most pressing issues facing society in the 21st century.

These "Grand Challenges," identified through initiatives such as the White House Strategy for American Innovation, the National Academy of Engineering (NAE) Grand Challenges for Engineering, and the United Nations Millennium Development Goals, include complex yet critical goals such as engineering better medicines, making solar energy cost-competitive with coal, securing cyberspace, and advancing personalized learning tools to deliver better education to more individuals.

The UI, along with each of the 122 signing schools, has pledged to graduate a minimum of 20 students per year who have been specially prepared to lead the way in solving such large-scale problems, with the goal of training more than 20,000 formally recognized “Grand Challenge Engineers” over the next decade.

Details of the UI College of Engineering's Grand Challenge Scholars Program are available at http://www.engineering.uiowa.edu/current-students/educational-opportunities/grand-challenges-scholars-program.

Grand Challenge Engineers will be trained through special programs at each institution that integrate five educational elements: (1) a hands-on research or design project connected to the Grand Challenges; (2) real-world, interdisciplinary experiential learning with clients and mentors; (3) entrepreneurship and innovation experience; (4) global and cross-cultural perspectives; and (5) service-learning.

More information on this initiative, including a copy of the letter of commitment, is available at http://www.engineeringchallenges.org/14373/15549/15785.aspx. The initiative grew out of a 2014 workshop organized by the American Association of Engineering Societies, Epicenter, Engineers Without Borders USA, EPICS, and the NAE Grand Challenge Scholars Program.