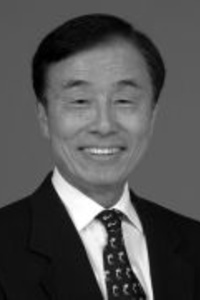 Dr. Sun Tak-Hwang received his bachelor's degree in chemical engineering from Seoul National University. He moved to the United States to obtain his Master's and PhD degrees at The University of Iowa. Dr. Hwang was asked to join the faculty at Iowa and, shortly after becoming a faculty member, won a grant from the National Science Foundation on the "Study of Surface Diffusion through a Porous Membrane" to develop his research program there. In 1982, he joined the Department of Chemical Engineering at the University of Cincinnati to become department head. Within his first year at UC, Dr. Hwang won a $2 million grant from BP Ohio to establish the Center of Excellence for Membrane Technology, of which he is currently director. He also is co-director of the National Science Foundation/University Cooperative Center for Membrane Applied Science and Technology.

He is a dedicated researcher who is noted as an international leader in membrane research. His early research at The University of Iowa with Professor Karl Kammermeyer set the stage for utilizing membrane processes for a variety of industrial applications. Their book entitled Membranes in Separations (1975) was celebrated internationally, and was translated into Russian in 1981. In 1985 Dr. Hwang, along with Elias Klein and Doug Lloyd, established the North American Membrane Society (NAMS) and a correspondence called Membrane Quarterly to enhance communication among other scientists and engineers in the field.

Dr. Hwang has received much recognition over the years for his work both in industry and academia. In 1998, he was awarded the Ho-Am prize, an honor presented to an elite few in Korea for his contributions to membrane separation in chemical engineering. Dr. Hwang has also been a consultant to multinational companies on membrane technology and served on editorial boards of several technical journals. The lasting impression he has made on his graduate students was made apparent when 10 of his students expressed their gratitude by collaborating to publish a book titled the Collective Works of Sun-Tak Hwang.