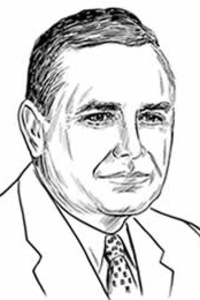 A talented researcher, a natural born teacher, and a man of contagious enthusiasm with vision and the ability to build bridges with the broader community, Phil Morgan developed a sanitary engineering research program in sewage treatment that became one of the best in the country. He created the Catalytic Reduction Process--a milestone in water pollution control.  Morgan was honored frequently by his peers, including receiving the American Water Works Association’s prestigious Fuller Award. As well as he was regarded nationally, fellow citizens of Iowa City knew him best as its mayor, as a city councilman, and as a congenial neighbor. Among those he mentored, Morgan was a conscientious teacher and a wise counselor.