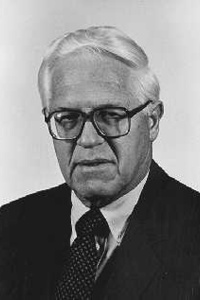 Randall Meyer began a 40-year career with Standard Oil Company, New Jersey (now Exxon Mobil Corporation) immediately following graduation. After serving in a number of managerial capacities in various locations, he became President of Exxon Company, USA in 1972 and Chief Executive Officer in 1976, a position he held until his retirement in 1988.

Until his death in 2012, Mr. Meyer attributed his satisfying career to the Midwest values he acquired growing up and to The University of Iowa for developing his awareness of the full range of values; a better understanding of the human conditions and an appreciation of the nature of citizenship in a republic. He believed that persons in business have great responsibilities to draw on the best of moral teaching and cultural wisdom; to be active progressive citizens in protecting and preserving our system of democratic capitalism; and to be involved in the most creative, inventive economic activities they can be.

He pursued these responsibilities in part by extensive involvement in petroleum industry, general business, public services, and community-building organizations and by intellectual exchange with policy research organizations and universities. He provided national service as trustee of The American Enterprise Institute for Public Policy Research; member of the Roundtable of the Center for Strategic and International Studies; member of the Boards of Directors of the Chamber of Commerce of the United States, and of the National Association of Manufacturers; member of the National Petroleum Council and Life Member of the Board of the Housman Community Foundation; former Chair and Director Emeritus of the Greater Houston Partnership; and founding member of the Board and former Chairman of The Forum.

Mr. Meyer was an outspoken advocate of combining professional preparation with a liberal education and believes that an engineering college located at the heart of a great liberal arts university is the ideal setting. He had been actively involved with the Deans of Engineering at several universities on curriculum changes and a shift to interdisciplinary teaching. He had shared his experiences in meeting the wide range of responsibilities of a person in business and the complexities of balancing multi-disciplinary considerations with engineering and business administration students as a visiting lecturer on numerous university campuses, speaking on such subjects as "Business as a Liberal Art" and "The Existential Pleasures of Engineering."

Mr. Myers wrote and spoke extensively on the responsibilities of all those with a vested interested in The University of Iowa to preserve its excellence and accessibility by reinvesting in it a part of the social and economic capital they have acquired as the result of their education. He was a member of the UI Foundation Board of Directors and the Campaign 2000 Steering Committee; the College of Engineering Development Council; and the College's Engineering Building Campaign Steering Committee. He served as a visiting executive to the College of Business Administration and Engineering, and was an active supporter of the University's International Writing Program.

He was honored with the Distinguished Alumni Award for Achievement in 1979, and with the Omicron Delta Kappa Outstanding Alumnus Award in 2001. He held an honorary Doctor of Letters degree from Iowa Wesleyan College.

Mr. Meyer and his wife, Barbara, generously supported the College's "Grabbing the Globe" Seminar Series at which key corporate, alumni, government, and academic leaders are invited to present their views, perspectives, and experiences on succeeding professionally and technologically in a global marketplace.