MS 1934 in Mechanics and Hydraulics 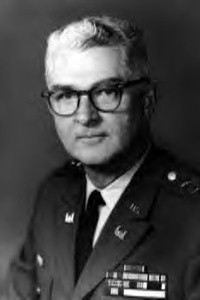 Born on an Army post near Nome, Alaska, Lt. Gen. William F. Cassidy graduated from the U.S. Military Academy in 1931, earned his MS degree in mechanics and hydraulics from The University of Iowa in 1934, and was commissioned in the Corps of Engineers.

He served as assistant to the district engineer in Portland, Oregon; commanded an engineer company at Fort Belvoir, Virginia; and oversaw military construction projects in Hawaii. During World War II, Lt. Gen. Cassidy commanded engineer troops specializing in airfield construction in England, North Africa, and Italy. He was Deputy Chief, then Chief, War Plans (later Operations and Training) Division, Office of the Chief of Engineers from 1944 until 1947. At the outbreak of the Korean conflict, he was ordered to Japan where he was responsible for engineer supply. He served as South Pacific Division Engineer from 1955 to 1958, and was the senior logistics advisor to the Republic of Korea Army in 1958-59. Lt. Gen. Cassidy was the Corps' Director of Civil Works from 1959 to 1962, and was then appointed Deputy Chief of Engineers. In 1963, he became the Commanding General of the Army Engineer Center and Fort Belvoir and Commandant of the Army Engineer School. Lt. Gen. Cassidy became Chief of Engineers in 1965.

He was awarded the Distinguished Service Medal for his service as Chief of Engineers. His other military decorations included the Legion of Merit with Oak Leaf Cluster, the Bronze Star Medal, and the Republic of Korea Presidential Citation. He was a member of the National Academy of Engineering. Lt. Gen. Cassidy died in April 2002.