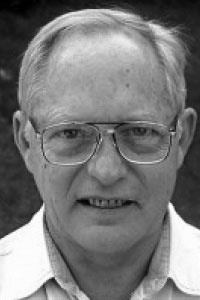 Engineering alumnus Dr. George D. Ashton is an international expert on the study of ice jams, ice control, flooding, snow drifting, snow loads, and river ice. Now a resident of New Hampshire, Ashton was born in Davenport, Iowa in 1939, received a BSCE degree in civil engineering from the University of Iowa in 1961 an MSCE in civil engineering from the University of Arizona, Tucson, Arizona in 1963, and a PhD in mechanics and hydraulics from the University of Iowa, in 1971. From 1962 to 1964 he was a Lieutenant in the U.S. Army. From 1964 to 1967 he worked as a Structural Engineer for Bechtel Co. in San Francisco. After earning his PhD, he joined the U.S. Army Cold Regions Research and Engineering Laboratory (CRREL) in Hanover, New Hampshire and held various research and management positions with his research concentrating on river ice processes and problems. From 1990 to 1998, he was Chief Research and Engineering Directorate. He retired in 1998 and now works as a private consultant in Lebanon, New Hampshire, dealing primarily with river ice problems. Ashton has received the Straub Medal from the University of Minnesota, the Hilgard prize from ASCE, the Stevens Award from ASCE and most recently the 2002 Ice Research and Engineering Award by the International Association for Hydraulic Research. He is the author of numerous papers and book chapters dealing with ice problems. He was Editor of the Journal of Cold Regions Science and Technology from 1995 to 2006.