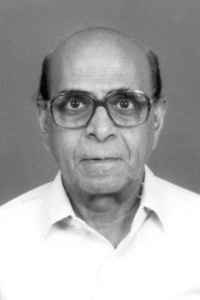 Dr. Chaturvedi is a globally recognized pioneer of water resources engineering in India, along with collaborations he has led in the U.S, Sweden, the former Soviet Union, Italy, and the United Kingdom. Dr. Chaturvedi is a founding member and Fellow of the International Water Resources Association, a Fellow of the Indian Academy of Engineering, and founder of the Departments of Civil Engineering at the Indian Institutes of Technology in Kanpur and Delhi. He has educated a generation of Indian scholars in water resources planning, economic and environmental policy in developing countries, and systems engineering.

He joined the Government of Uttar Pradesh in 1946 after completing his undergraduate education and helped design several major multipurpose water resources projects such as the Khatima Power House and Rihand Dam. After completing his advanced studies at The University of Iowa, he was Director of Design on the Ramganga Project. After its completion in 1967, he was appointed Professor and Founder Head, and later Dean of Research in the Department of Applied Mechanics at the Indian Institute of Technology. He continued to work concurrently on planning and design of several major projects as a member of the Board of Consultants. These projects included the Tehri Dam, one of the world’s highest dams. He also worked on systems planning of several river basins such as Indus Basin, and Ganges-Brahmputra-Meghana basin. On retirement from IIT Delhi in 1985, he joined the Planning Commission, Government of India until leaving for the U.S. to join the University of Texas-Austin in 1989.

Dr. Chaturvedi has published four books. He currently is working in sustainability science as an independent scholar, guiding research at the Indian Institute of Technology, Delhi and engaged in writing three books on the subject.

Dr. Chaturvedi and his wife established the Vipula and Mahesh Chaturvedi Foundation, providing support for projects that advance science and the human condition.